Oncocytoma is the most common benign solid renal tumor and constitute 3-7% of all primary renal neoplasms.
Oncocytoma affects mainly older patients, often in the seventh decade of life. Oncocytomas are most often discovered incidentally by imaging during a workup for other conditions. About one third of patients have signs and/or symptoms, with flank/abdominal pain, hematuria, and/or a flank mass being the most common. Rare familial cases have been described, and many of these patients have Birt-Hogg-Dubé syndrome.

The differential diagnosis of oncocytoma includes other neoplasms with eosinophilic or oncocytic cytoplasm, primarily chromophobe renal cell carcinoma (RCC), but also clear-cell RCC with eosinophilic cytoplasm and oncocytic variant of papillary RCC. Infrequently, oncocytoid RCC occurring after neuroblastoma and epithelioid angiomyolipoma ought to be included in the differential.

Because onocytoma is a benign disease, differentiating it from RCCs is important in that it can often be treated conservatively.
. Size of RCCs, lesion enhancement in the excretory phase, and heterogeneous patterns can help distinguish RCCs from oncocytomas.
The central stellate scar can help differentiate renal oncocytomas, but this scar may also be seen in cases of RCCs, thereby limiting its accuracy as a differentiating feature.

Oncocytosis is a rare condition characterized by multiple oncocytic tumors with histologic features including renal oncocytoma, hybrid oncocytic tumor, and, occasionally, chromophobe RCC. Oncocytic nodules may be present in one or both kidneys, usually with one dominant nodule.

Computed tomography (CT) scanning of the abdomen, combined with intravenous administration of iodinated contrast medium, is the examination of choice and the best modality for the evaluation of a solid renal mass. This technique assists in the detection and localization of the tumor, and CT scanning may help in characterizing the mass, especially if fat-containing lesions (eg, angiomyolipomas) are present. Additionally, staging of the tumor can be performed to classify the extent of the lesion, regional lymphadenopathy, vascular involvement, and metastases. CT scanning also helps in the detection of calcifications and in the differentiation of a complex cyst from a solid neoplasm.

The imaging characteristics of oncocytomas and RCCs overlap, and differentiating an oncocytoma from an RCC and other solid renal neoplasms is not always possible with ultrasonography, CT scanning, or magnetic resonance imaging (MRI). The presence of a central scar on CT scans or MRIs and a spoke-wheel pattern of vessels on angiograms are often suggestive of oncocytoma but are not entirely specific.

Because of the overlap in imaging features and histologic appearances between oncocytomas and RCCs, accurate differentiation on preoperative imaging or percutaneous biopsy remains difficult. The diagnosis is often retrospectively established by means of gross pathology and microscopy with special stains. 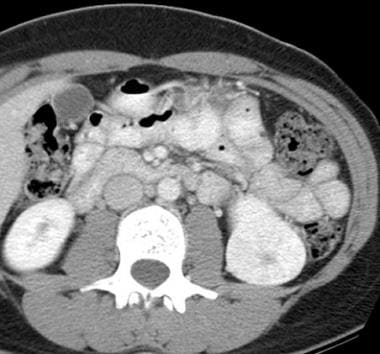 Contrast-enhanced computed tomography (CT) scan of the abdomen obtained during the nephrographic phase. This CT scan shows a well-defined, enhancing mass lesion in the lower pole of the left kidney. A central hypoattenuating stellate scar is seen. 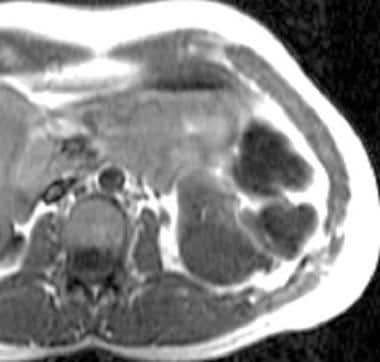 T1-weighted magnetic resonance image (MRI). This MRI shows a homogeneous, hypointense, well-defined mass in the lower pole of the kidney.