Ultrasonography can be used to detect, and sometimes to characterize, the features of this tumor, especially when the classic features are present. In comparison, CT is superior in lesion depiction and characterization, and it is the preferred imaging modality in the initial workup of pancreatic lesions. However, the first test performed is usually ultrasonography, because the typical presenting symptom is abdominal pain and/or nausea.

MRI can be a useful problem-solving adjunct in select cases. For example, when an evaluation of the ducts is needed, magnetic resonance cholangiopancreatography (MRCP) can be useful.

Findings from plain radiography and upper GI series are nondiagnostic, except the finding of a classic sunburst central calcification, which is suggestive. 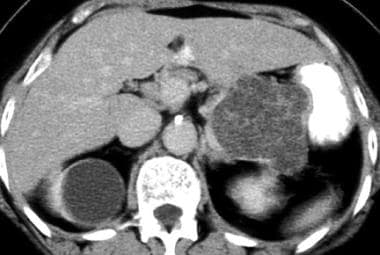 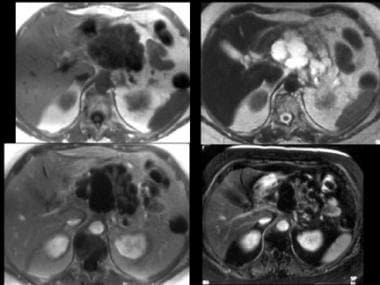 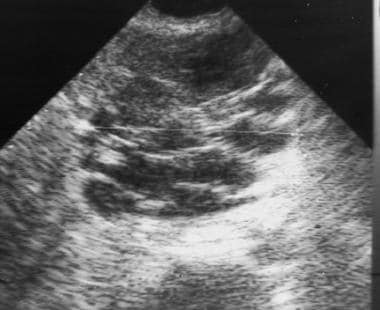 Sonogram of serous cystadenoma. The large mass in the head of the pancreas is externally lobulated, with some cystic-appearing regions, some solid-appearing regions, and increased through transmission. Image courtesy of Arnold C Friedman, MD, FACR.

Because of the significant overlap in the imaging findings of mucinous and serous pancreatic tumors, these tumors should be followed up with surveillance computed tomography (CT) scanning to assess interval growth if aspiration is not performed.

The diagnosis of a serous cystadenoma should be made with caution unless the lesion has all of the typical findings. If a mucinous cystic lesion is incorrectly diagnosed as a serous cystadenoma and if surveillance CT or magnetic resonance imaging (MRI) scan is not performed, grave consequences could result.

The diagnosis of pancreatitis and pseudocyst is generally straightforward, especially in a clinical setting of chronic alcoholism with a history of pancreatitis. If the tumor is large enough, symptoms related to mass effects may predominate. Smaller tumors may be discovered incidentally on abdominal ultrasonogram or CT scan.

Imaging findings are usually confirmatory in difficult cases. Adenocarcinoma is most commonly solid and, therefore, infrequently confused with cystic neoplasms. The other entities can have imaging features that are highly suggestive of one entity rather than another. Communication with the pancreatic duct strongly suggests mucinous cystic neoplasm or IPMT instead of serous cystadenoma.

A central stellate scar with calcification and a grapelike cluster of cysts and external lobulation strongly suggests serous cystadenoma. However, the imaging features of these entities can overlap considerably; therefore, an analysis of the percutaneous cells and cystic fluid is often required for diagnosis. In fact, approximately 10% of all serous cystadenomas have cystic components larger than 2 cm and cannot be distinguished from mucinous cystic neoplasms.

When stellate calcification or the classic CT scan features of central sunburst are present in a multilocular cystic mass in an older woman, some institutions accept this as a clearly benign finding. In one series, however, CT scanning was useful in depicting the lesions, but it was not useful in differentiating benign and malignant tumors, serous and mucinous tumors, or pseudocysts and neoplasms.