Duodenal ulcers (DUs) affect nearly 10% of the adult population at some point in life,
and these lesions account for two thirds of all peptic ulcers, which are defined as mucosal breaks of 3 mm or greater; gastric ulcers account for the rest. Unlike gastric ulcers, which may be malignant in about 5% of cases,
duodenal ulcers are almost invariably benign; therefore, treatment with antisecretory drugs can be commenced after radiologic diagnosis, without endoscopy being performed beforehand.
Images of duodenal ulcers are provided below. 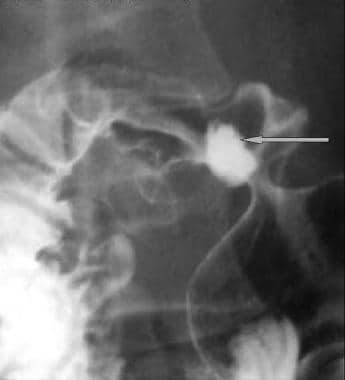 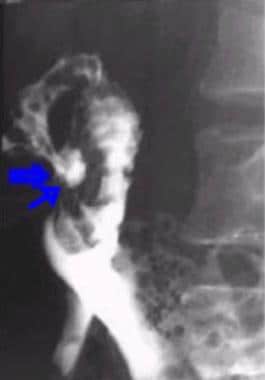 Lateral view of a posterior wall ulcer in the same patient as in the previous image. 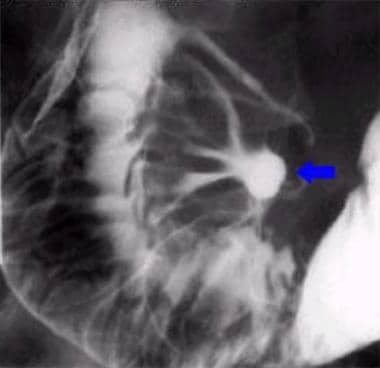 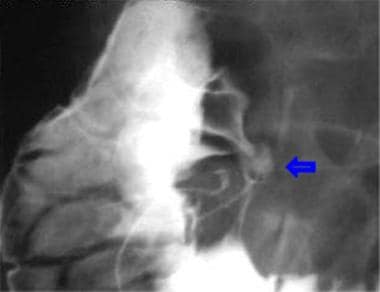 Lateral view of an anterior wall duodenal ulcer in the same patient as in the previous image.

Endoscopy has become the diagnostic procedure of choice for patients with suspected duodenal ulcer. However, endoscopy is more invasive and costly than double-contrast barium study. Double-contrast examinations of the upper gastrointestinal tract remain a useful alternative to endoscopy but have a lower sensitivity, especially in the detection of small duodenal ulcers.
Endoscopy with biopsy has a sensitivity of as high as 95%, but small ulcers in the base of the duodenal bulb may be missed. In the presence of gastric outlet or proximal duodenal obstruction, the endoscope may be unable to pass through the stenosis, and the full extent and cause of the obstruction may not be defined.

Single-contrast barium studies may cause as many as 40% of small ulcers to be missed, but double-contrast barium images depict as many as 95% of ulcers larger than 10 mm
; these results are comparable to those of endoscopy. However, the sensitivity of double-contrast barium examination decreases with smaller ulcers and recurrent ulcers in a deformed duodenal bulb; therefore, this modality is not reliable in the detection of duodenitis or duodenal erosions. Barium studies have a disadvantage because biopsy specimens cannot be obtained to test for Helicobacter pylori infection or to evaluate a suspicious lesion.

Transcatheter embolization may be used to treat bleeding duodenal ulcers.
Terminal muscular-branch vessel embolization is more effective than gastroduodenal artery embolization in the initial and long-term control of bleeding. Terminal vessels may be occluded with 6-cyanoacrylate, but duodenal stenosis is a late complication in one quarter of all patients.