Achalasia is an esophageal motor disorder characterized by increased lower esophageal sphincter (LES) pressure, diminished to absent peristalsis in the distal portion of the esophagus composed of smooth muscle, and lack of a coordinated LES relaxation in response to swallowing. Patients with achalasia commonly present with dysphagia to solids and liquids, regurgitation unresponsive to proton pump inhibitors, and chest pain.

According to the American College of Gastroenterology,  proper diagnosis of the disorder should include the following
:

Esophageal motility test on all patients suspected of having achalasia.

Esophagram findings to support a diagnosis.

Endoscopic assessment of the gastroesophageal junction and gastric cardia to rule out pseudoachalasia.

The Chicago classification is a currently accepted system that separates classic achalasia into 3 clinically relevant subtypes
:

The manometric findings common to all types of achalasia include impaired relaxation of the LES (residual pressure or integrated relaxation pressure of ≥10 mmHg) and absent peristalsis in a patient without mechanical obstruction near the LES.

Type I has 100% absent peristalsis and no significant esophageal pressurization.

Type II has 100% absent peristalsis with ≥20% of swallows with pan-esophageal pressurization to >30 mmHg.

Type III has ≥20% of swallows with premature spastic contractions (distal latency of <4.5 s).

Barium swallow studies of achalasia are presented below. 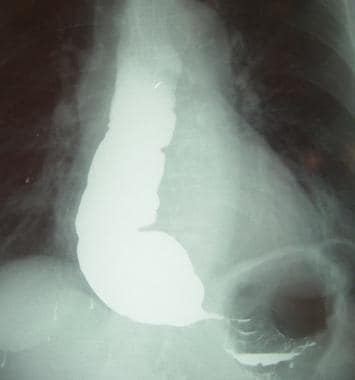 Barium swallow study demonstrating characteristics of achalasia, including the bird’s beak deformity and a dilated esophagus. 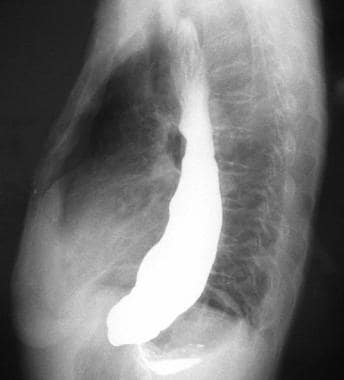 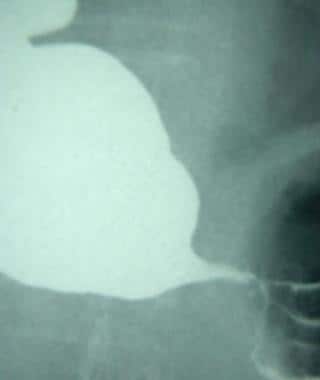 Detail of a barium swallow study demonstrating the classic bird’s beak deformity of the distal esophagus.

Primary achalasia is the most common subtype and is associated with loss of ganglion cells in the esophageal myenteric plexus. These important inhibitory neurons induce LES relaxation and coordinate proximal-to-distal peristaltic contraction of the esophagus. Secondary achalasia is relatively uncommon. This condition exists when a process other than intrinsic disease of the esophageal myenteric plexus is the etiology. Examples of maladies causing secondary achalasia include certain malignancies, diabetes mellitus, and Chagas disease.

The radiologic examination of choice in the diagnosis of achalasia is a barium swallow study performed under fluoroscopic guidance.
A diagnosis of achalasia supported by the results of radiologic studies must always be confirmed by performing upper gastrointestinal endoscopy and esophageal manometry. These tests allow the direct evaluation and inspection of the esophageal mucosa and an objective measurement of esophageal contractility.

Normal findings on a barium swallow study do not completely exclude achalasia, especially in the condition’s early stages. This situation is when esophageal manometry is most valuable, because the physiologic derangements associated with achalasia precede the development of the anatomic findings discernible by using radiographic studies.