Pneumothorax, the presence of air within the pleural space, is considered to be one of the most common forms of thoracic disease. It is classified as spontaneous (not caused by trauma), traumatic, or iatrogenic (see the images below).

Chest radiography is the first investigation performed to assess pneumothorax, because it is simple, inexpensive, rapid, and noninvasive; however, it is much less sensitive than chest computed tomography (CT) scanning in detecting blebs or bullae or a small pneumothorax.
High-resolution thin-slice CT has been found to have a greater senstivity for blebs and bullae than routine CT.
The use of ultrasound for detection of pneumothorax has been studied for both adults and children and has been shown to be particularly sensitive in newborns. 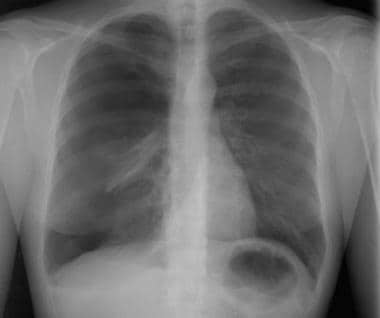 A large, right-sided pneumothorax has occurred from a rupture of a subpleural bleb. 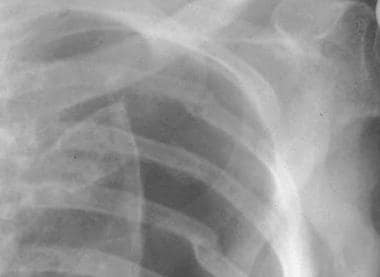 A true pneumothorax line. Note that the visceral pleural line is observed clearly, with the absence of vascular marking beyond the pleural line.

In neonates with pneumothorax,
ultrasound has been found in some studies to be comparable to chest radiography. A study by Cattarossi et al found that ultrasound was able to detect pneumothorax in all 23 affected patients.
Another study, by Raimondi et al, found that in 26 critically ill newborns, sensitivity, specificity, positive predictive value, and negative predictive value were all 100%.

Traumatic pneumothorax is caused by penetrating or blunt trauma to the chest, with air entering the pleural space directly through the chest wall, through visceral pleural penetration, or through alveolar rupture resulting from sudden compression of the chest.

Iatronic pneumothorax results from a complication of a diagnostic or therapeutic intervention. With the increasing use of invasive diagnostic procedures, iatrogenic pneumothorax likely will become more common, although most cases are of little clinical significance.

Persistent pneumothorax is defined as a continued air leak from an in situ chest drain for more than 48 hours after insertion. This may result from a kink in, or malposition of, the tube; lung parenchymal disease; bronchopleural fistula; or esophageal-pleural fistula.

Other complications include the following:

Bronchopleural fistula – Occurs in 3-5% of patients

Tension pneumothorax may occur after spontaneous pneumothorax, although it is more common after traumatic pneumothorax or with mechanical ventilation.