In bronchiectasis, damaged epithelium impairs removal of mucus and increases the risk of infection by pathogens such as Pseudomonas aeruginosa, Haemophilus, Aspergillus fumigatus, and nontuberculous mycobacteria.

Hemoptysis is common and may occur in as many as 50% of patients. Episodic hemoptysis with little to no sputum production (dry bronchiectasis) is usually a sequela of tuberculosis. However, massive hemoptysis may occur; bleeding usually originates in dilated bronchial arteries, which contain blood at systemic (rather than pulmonary) pressures.

Diagnosis of bronchiectasis is based on a clinical history of daily viscid sputum production and characteristic computed tomography (CT) scan findings.
(See the images below.)

Chest radiography is usually the first imaging examination, but the findings are often nonspecific, and the images can appear normal.
High-resolution computed tomography (HRCT) scanning was once the imaging modality of choice for assessing the possibility of bronchiectasis and its extent (see the images below). HRCT scanning also helped radiologists evaluate the surrounding tissue for other pathology, such as malignancy.

Until the advent of HRCT scanning, bronchography was the classic modality used for imaging bronchiectasis. Bronchography is performed by instilling an iodine-based contrast material via a catheter or bronchoscope, but it is rarely, if ever, performed today, as CT scanning has replaced it as the diagnostic modality of choice. HRCT scanning is noninvasive and has a sensitivity of 96% and a specificity of 93%.

Volumetric multidetector CT acquisition of the chest is now the preferred examination for the diagnosis of bronchiectasis. Compared with the previous criterion standard of high-resolution CT (HRCT), volumetric CT offers several improvements.
Equivalent reconstructed HRCT images can be generated from the volumetric data set without additional scanning.
In addition, volumetric CT allows multiplanar reconstructions, which improve assurance of diagnosis, at least partially by permitting better assessment of absence of tapering of bronchi.
By including the entire lung volume, volumetric CT increases the sensitivity of detection for smaller regions of bronchiectasis and permits more confident exclusion of the diagnosis.
Pulmonary vessels and foci of mucous plugging can be differentiated from lung nodules with volumetric chest CT, avoiding unnecessary repeat examinations.

Volumetric CT can be acquired in a single breath-hold. This reduces breathing artifact, which can be confused with bronchiectasis.
Since the initial demonstration of improvement in diagnostic accuracy with multidetector row CT, CT technology has progressed remarkably with the addition of more detectors and substantial improvements in scanner speed. These improvements have solidified the superiority of volumetric CT as the preferred examination.

Although volumetric CT has numerous advantages, the radiation dose is higher. Radiation dose can be mitigated by several techniques.
This is particularly important in pediatric patients, because of their increased radiation sensitivity. Radiologists should use modified protocols especially suited for children.
Limited HRCT imaging could be appropriate in some patients for follow-up imaging in order to reduce the radiation dose. 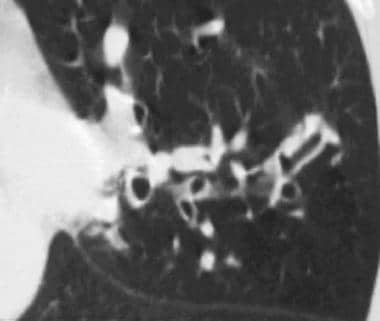 The HRCT scan shows thick-walled, slightly ectatic bronchi. The patient has cystic fibrosis, which was diagnosed and treated since childhood. 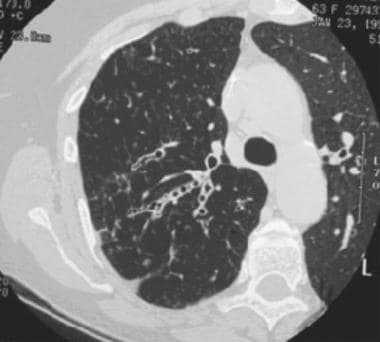 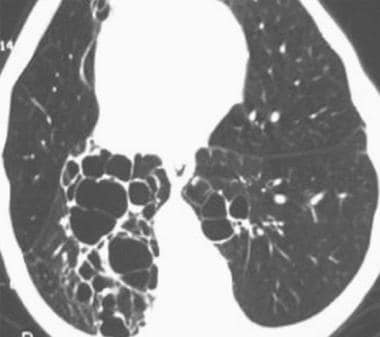 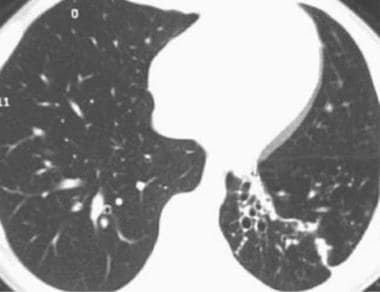 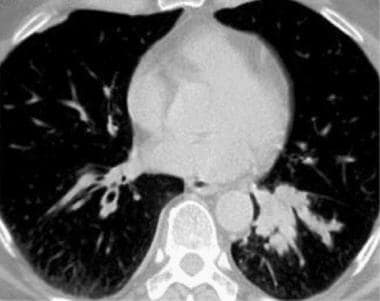 This HRCT scan demonstrates findings of fluid-filled dilated bronchi in the left lower lobe of a 65-year-old man.

The classic clinical presentation for a patient with bronchiectasis is intermittent or daily, often purulent, sputum production. This is often accompanied by other symptoms such as dyspnea, fatigue, weight loss, chest pain, hemoptysis, and clubbing of the fingers.
Patients may develop respiratory failure or right heart failure.
The classic clinical presentation should prompt further investigation by chest CT.

However, bronchiectasis is a morphologic pattern, which is typically identified by chest CT. It is the final common pathway for many fundamental causes, which have a broad range of presentations. A more specific approach is to identify the basic cause of bronchiectasis, if possible, and consider the clinical details of that cause.

Bronchiectasis is not caused by a single factor, but is a complex interplay between repeated inflammation and a defective immune response to inflammation.
Many congenital or acquired abnormalities can prevent normal airway defense and repair, resulting in infection. If the initial reaction to infection is ineffective, the immune response is increased and prolonged, potentially causing a vicious circle of bronchial injury and increased inflammation that leads to bronchiectasis.
Bronchial damage includes variable amounts of bronchomalacia or fibrosis and disturbance of mucociliary function.

Allergic bronchopulmonary aspergillosis is caused by an abnormal immune response to Aspergillus fumigatus, which results in bronchiectasis.
Infection can be the inciting cause for bronchiectasis. Viral infections associated with bronchiectasis include pertussis, measles, whooping cough, and influenza.
Bacterial infections, such as Haemophilus influenzae, Streptococcus pneumoniae, Staphylococcus aureus, Pseudomonas aeruginosa, and typical and atypical tuberculosis, have been cultured from patients with bronchiectasis.

Ordinarily, pathogens are trapped by bronchial mucus and removed by the mucociliary elevator. Some patients, such as patients with cystic fibrosis or Young syndrome, have an altered mucous viscosity that impedes effective mucous removal.
Others, such as patients with primary ciliary dyskinesia, have a defective anatomic mechanism for mucous clearance.

Altered anatomy can play a role in recurrent infections. A congenital abnormality that affects normal anatomy, such as communicating bronchopulmonary foregut malformation, tracheal bronchus, or accessory cardiac bronchus can precipitate bronchiectasis.
Patients with Williams-Campbell syndrome have a congenital cartilage defect that predisposes them to bronchiectasis,
while patients with Mounier-Kuhn syndrome (tracheobronchomegaly) have deficient tracheobronchial smooth muscle and elastic fibers.

Inhalational lung injury from smoke or other noxious gases often is the initial event in the cycle ending in bronchiectasis.
Central bronchial obstruction can be caused by foreign body, broncholith, tumor, or lymphadenopathy, leading to bronchiectasis.
Patients with end-stage fibrosis can develop traction bronchiectasis and bronchiolectasis. Common examples include usual interstitial pneumonitis, tuberculosis, sarcoidosis, and radiation fibrosis. High negative pleural pressures and increased elastic recoil in pulmonary fibrosis interact to enlarge the bronchi.
The dilated bronchi are typically distorted with a beaded appearance.
Depending on the distribution of fibrosis, traction bronchiectasis can be regional or widespread. Traction bronchiectasis is restricted to the areas of end-stage fibrosis and particularly affects peripheral bronchi, which lack cartilage support.

For whites, cystic fibrosis is the most common life-threatening recessive genetic problem.
Cystic fibrosis occurs in about 1 in 3,200 white live births; 1 in 15,000 African-American live births; and 1 in 31,000 Asian-American live births.
In a University of Chicago study of 106 bronchiectasis patients of a diverse US population, bronchiectasis attributable to rheumatoid arthritis occurred more frequently in African-Americans than European-Americans, while bronchiectasis related to hematologic malignancy occurred more frequently in European-Americans than in African-Americans.
Hispanic-Americans had positive sputum culture for P aeruginosa more often than the other ethnic groups in that study.
A review of bronchiectasis in Medicare beneficiaries determined that for patients who had one chest CT scan, Asians were 2.5 times more likely to have bronchiectasis than whites and 3.9 times more likely than blacks.
A study of nontuberculous bronchiectasis in Medicare beneficiaries found the prevalence in blacks was half that of whites and the prevalence in Asians/Pacific Islanders was twice that of whites.

Overall, bronchiectasis unrelated to cystic fibrosis occurs more frequently and is more severe in women.
Although cystic fibrosis has an equal distribution between males and females, the diagnosis may be delayed in females, which could explain why females tend to die younger.
Rheumatoid arthritis,
sarcoidosis,
and Sjögren syndrome all have a female predominance and predispose to bronchiectasis. Mycobacterial tuberculosis occurs more frequently in males.
Mycobacterium avium complex has generally been found more frequently in older women.
Women in the United States are diagnosed with nontuberculous mycobacterial disease 1.4 times more frequently than men among Medicare patients older than 65 years.
With various study methodologies and geographic locations, sex ratios for nontuberculous mycobacterial disease can vary considerably.

Quality of life can be assessed by the St George’s Respiratory Questionnaire or the Leicester Cough Questionnaire.
Frequency of exacerbations of symptoms can be used to judge effectiveness of treatment, and exercise capacity can be evaluated by the incremental shuffle walk test or the 6-minute walking test.

Mortality risk is correlated with numerous demographic, pulmonary function, and quality-of-life variables.
CT imaging variables with the highest mortality risk include extent of bronchiectasis, severity of dilatation, and bronchial wall thickness.
Surgical mortality for bronchiectasis ranges from 0-2.2% and morbidity is 18-23%.

Patients with cystic bronchiectasis are at risk for developing a mycetoma within a dilated bronchus. Hemoptysis is common and may occur in as many as 50% of patients. Episodic hemoptysis with little to no sputum production (dry bronchiectasis) is usually a sequela of tuberculosis. However, massive hemoptysis may occur; bleeding usually originates in dilated bronchial arteries, which contain blood at systemic (rather than pulmonary) pressures.

The main anatomic types of bronchiectasis are the following
:

Bronchoscopy is not helpful in diagnosing bronchiectasis, but it may be used to identify underlying abnormalities, such as tumors and foreign bodies.

Chest radiographs may be negative in patients with minor to moderate disease. Many abnormal radiographic findings may be nonspecific, and confirmation using volumetric CT scanning may be required.

Bronchography is rarely indicated because it is invasive and is associated with allergic reactions to the contrast material. Bronchography also carries the risk of acute bronchoconstriction.