Blastomyces dermatitidis is a thermally dimorphic fungus that causes the systemic pyogranulomatous disease termed blastomycosis. This pathogen is endemic to North America, particularly in the states bordering the Mississippi and Ohio rivers, the Great Lakes, and the St. Lawrence Seaway.
Blastomycosis is the least common of the endemic systemic mycoses; the other, more common mycoses include histoplasmosis and coccidioidomycosis. Lungs, and to a lesser extent, skin and bone, are the most common organs involved with this fungus. Hematogenous dissemination can occur. 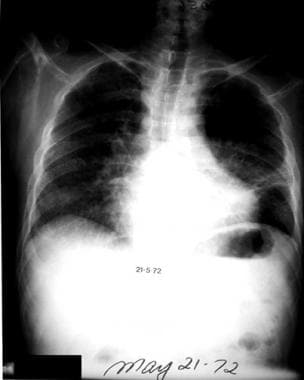 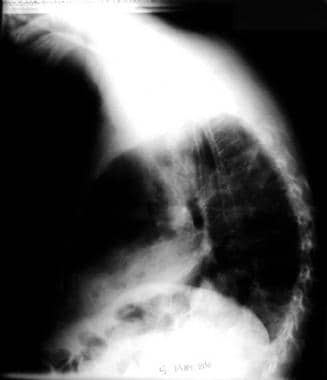 Lateral chest radiograph (same patient as in the previous image) reveals the ill-defined lingular opacity and an absence of pleural effusions.

The diagnosis of thoracic blastomycosis is made on the basis of a demonstration of organisms in culture or on fungal stains (10% potassium hydroxide) of sputum, bronchoscopy specimens, or secretions obtained from cerebrospinal fluids or dermal, subcutaneous, or other lesions.
Cultures are positive in more than 90% of cases. Culture growth may take from 1 to several weeks.

Radiographic findings are nonspecific and variable, with radiographic patterns of thoracic blastomycosis being indistinguishable from those of other mycotic infections.

Chest radiography is the first imaging study performed. The most common pattern observed is acute, nonspecific focal lung opacity, which is found in 25-75% of patients.