Truncus arteriosus is a congenital heart disease characterized by a single great artery that leaves the base of the heart, giving rise to the coronary, pulmonary, and systemic arteries. Chest radiography usually is the initial investigation performed in the neonatal period. Cardiomegaly is frequently present at birth. Chest radiographic findings usually reveal the increase in pulmonary arterial blood flow manifesting as increased pulmonary vascular markings. The combination of a right-sided aortic arch, cardiomegaly, and increased pulmonary vascularity strongly suggests truncus arteriosus; however, further diagnostic investigations are always needed to confirm the diagnosis.

Echocardiography is the modality of choice for diagnosing truncus arteriosus. The other investigations noted in this section are complementary. Echocardiography has markedly changed the evaluation, diagnosis, and management of congenital heart disease. Echocardiographic findings, usually diagnostic, demonstrate the origin and configuration of the pulmonary arteries, the ventricular septal defect, the truncus arteriosus, and the aortic arch, as well as the status of the truncal valve. Complete echocardiographic examination can be performed to establish goal-directed treatment, to almost eliminate the need for confirmatory cardiac catheterization, and to provide a cost-effective, feasible tool for close follow-up observation of patients after surgery.

Computed tomography (CT) scanning is another imaging modality that can be used to evaluate infants with complex congenital heart disease.
Standard CT scans are useful for evaluating suggested anomalies of the aortic arch, a double aortic arch, and retroesophageal vascular structures indicating an anomalous origin of the subclavian artery. Electron-beam CT (EBCT) scanning accurately defines systemic and pulmonary venous connections, demonstrating other anomalies associated with truncus arteriosus, including abnormalities of the pulmonary artery.

Contrast-enhanced EBCT and magnetic resonance imaging (MRI) are the noninvasive procedures of choice for the diagnosis and exclusion of anomalies of the origin and course of the coronary arteries. Standard CT, EBCT, and MRI are useful, noninvasive techniques for visualizing the cardiovascular anatomy in patients with congenital heart disease. EBCT and MRI can also enable assessment of cardiovascular function. MRI appears to be the most suitable of these techniques for assessing congenital heart disease.

MRI of complex congenital heart diseases is necessary for preoperative assessment in adults and in infants, and the results influence surgical planning by providing information about the anatomic topography of the vascular malformation and its relation to the bronchial system. MRI is reliable in classifying truncus arteriosus by showing the anatomy of the pulmonary artery. The size of the pulmonary artery and its branches can be measured in the transverse, coronal, and sagittal planes.

The role of nuclear imaging in the diagnosis of truncus arteriosus is not well established. However, all of the other modalities, including cardiac angiography, are the standard of care for diagnosing this complex congenital cardiac disease with all of its associated anomalies.

Although imaging modalities have improved tremendously, some limitations remain. One fairly common pitfall with imaging techniques is the suggestion of the presence of a partially formed aorticopulmonary septum and, therefore, the presence of a main pulmonary segment. At surgery, however, the branch pulmonary artery orifices may be found adjacent to one another in the left posterolateral aspect of the common arterial trunk. The surgeon may be unable to excise a main pulmonary artery segment from the common arterial trunk, even when the segment was depicted on images, because it may have no actual length.

The images below demonstrate the radiographic characteristics of truncus arteriosus.

Coronal T1-weighted MRI of the chest in a patient with truncus arteriosus demonstrates a large aorta and a small main pulmonary artery. 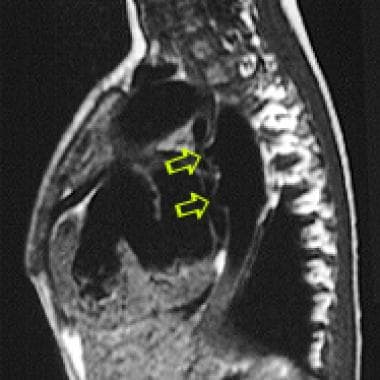 Sagittal T1-weighted MRI of the chest in a patient with truncus arteriosus demonstrates a large aorta and a small main pulmonary artery with evidence of collaterals to the lungs from the descending aorta (arrows). Note the large ventricular septal defect.

In truncus arteriosus, 4 anatomic types are recognized on the basis of the anatomic origin of the pulmonary arteries, according to Collette and Edwards.
Types I-III are demonstrated in the image below. 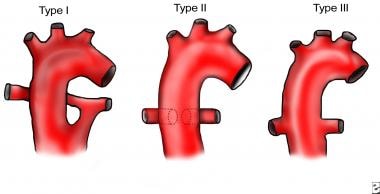 In type I, a common form, a short pulmonary trunk arises from the truncus arteriosus, giving rise to both pulmonary arteries.

In type II, each pulmonary artery arises separate from, but close to, the other, from the posterior aspect of the truncus.

In type III, each pulmonary artery arises from the lateral aspect of the truncus.

Type IV, pseudotruncus (seen in the image below), is currently considered to represent a form of pulmonary atresia with ventricular septal defect, that is, a severe form of tetralogy of Fallot, rather than truncus arteriosus. 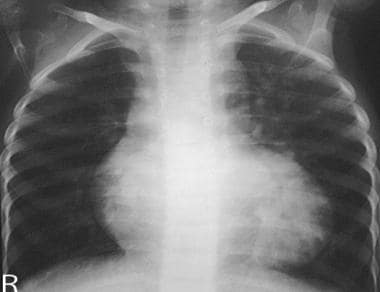 Plain frontal chest radiograph of a pseudotruncus. The aorta is left sided and appears large with a small and concave main pulmonary artery. The left and right pulmonary arteries are deficient. Evidence of bronchial circulation is noted.

In 1965, Van Praagh introduced a new classification with 4 subtypes, which are demonstrated in the images below.

Type 1 is similar to the type I described by Collette and Edwards. 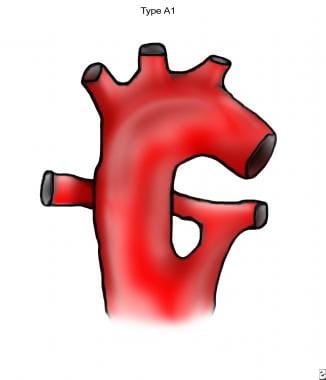 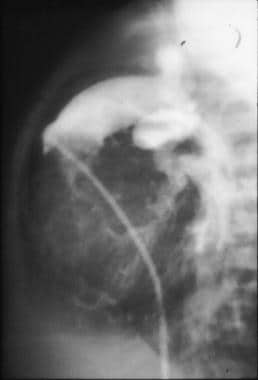 Type 2 is made up mostly of types II and III in the Collette and Edwards classification, in which the proximity of the origin of the pulmonary arteries is not specified. 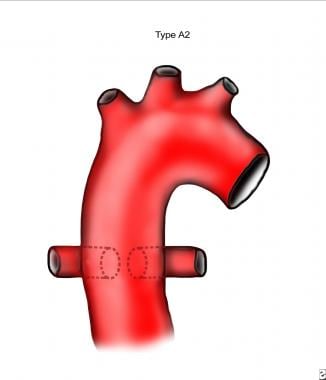 Van Praagh classification of truncus arteriosus type A2, which is similar to the Collette and Edwards types II and III.

In type 3, 1 pulmonary artery branch does not arise from the common pulmonary trunk, instead originating from the ductus arteriosus or directly from the aorta. 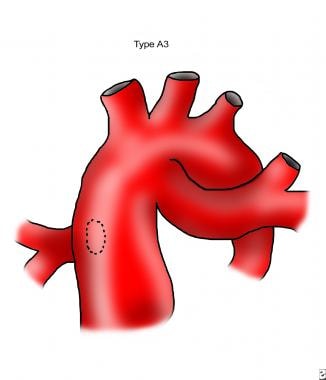 Van Praagh classification of truncus arteriosus type A3 in which 1 pulmonary artery branch originates from the ductus arteriosus or directly from the aorta and does not arise from the common trunk.

In type 4, the aortic arch is hypoplastic or interrupted, and a large patent ductus arteriosus is present. 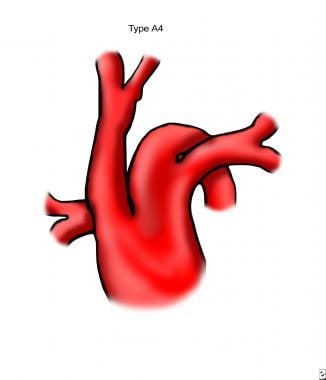 Van Praagh classification of truncus arteriosus type A4. The aortic arch is hypoplastic or interrupted, and a large, patent ductus arteriosus is present.

The Van Praagh classification specifies the presence (subtype A) or absence (subtype B) of ventricular septal defect. Each case is accordingly assigned a nomenclature that includes a letter and a number.

Although both classifications have found wide application in clinical cardiology and cardiac surgery, each has limitations. Collette and Edwards type IV is probably a misnomer, because it describes a separate entity with different therapeutic and prognostic implications. In addition, cardiothoracic surgeons often refer to a type 1½, which is similar to type I but with a shallow aorticopulmonary segment. This fairly common entity is not included in either classification.