For patients with anomalous pulmonary venous return, echocardiography is the preferred examination.
The echocardiogram demonstrates an enlarged right ventricle and a small left atrium. It may also show the pattern of abnormal pulmonary venous connections. When the pattern of Doppler venous flow of the abdominal veins is obtained, the finding of venous flow away from the heart is pathognomonic of TAPVR below the diaphragm. Shunting occurs almost exclusively from right to left at the atrial level.

TAPVR is a cyanotic lesion. Echocardiographic results usually confirm the diagnosis. MRI and fast CT are also useful for defining pulmonary venous drainage. With cardiac catheterization, the presence of anomalous pulmonary veins may be demonstrated by means of selective pulmonary arteriography.

Sometimes, in anomalous pulmonary venous return, echocardiographic views are limited, and MRI may be necessary.

There are 3 major clinical patterns of TAPVR:

See the image below depicting TAPVR. 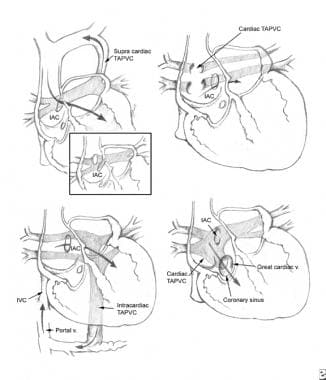 The history, physical signs, and electrocardiographic and radiographic findings of PAPVR and TAPVR are similar to those seen in patients with an isolated ostium secundum atrial septal defect (ASD). In some cases, an anomalous vein that drains into the inferior vena cava appears on chest radiography as a crescentic shadow of vascular opacity (like a scimitar) along the right border of the cardiac silhouette (scimitar syndrome). In these patients, an associated ASD is not seen; rather, pulmonary sequestration and anomalous arterial supply to the affected lobe of the lung are encountered.