The ductus arteriosus is a normal fetal anatomic structure that connects the systemic and pulmonary circulations. It usually closes shortly after birth; if it remains patent, the ductus arteriosus may cause heart failure that results from a large shunt into the lungs, the development of pulmonary hypertension, or endocarditis. In its isolated form, patients with patent ductus arteriosus (PDA) are frequently asymptomatic. PDA has been described in combination with virtually every other congenital heart disease, especially those that are characterized by cyanosis, in which this condition may be essential for survival. Patient age at diagnosis can vary from infancy to old age. Imaging results in patent ductus arteriosus are provided below. 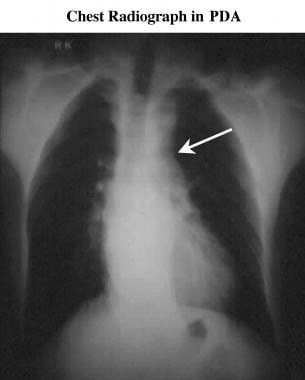 Frontal chest radiograph in a patient with patent ductus arteriosus. This image shows filling in of the aortopulmonary window (arrow). 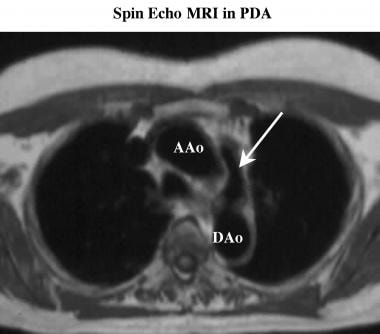 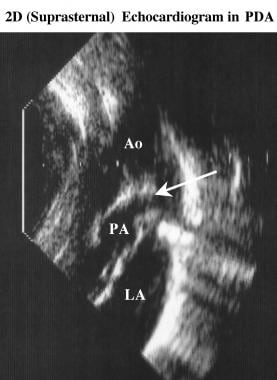 Two-dimensional echocardiogram (suprasternal view). This image shows a large patent ductus arteriosus (arrow) that runs above the left atrium (LA) between the aorta (Ao) and the pulmonary artery (PA).

The diagnosis is usually made clinically and confirmed echocardiographically, although magnetic resonance imaging (MRI) can also demonstrate a PDA.
The preferred imaging method for is 2-dimensional (2-D) echocardiography with color flow Doppler ultrasonographic study.
The primary limitation of echocardiography is the restriction imposed by limited acoustic windows.

In situations in which echocardiography is inadequate (eg, chest deformity, airway disease), magnetic resonance angiography (MRA) is a sensitive technique that can detect ductal flow in the left pulmonary artery, even when the PDA is too small to be visualized.

Conventional treatment has been with indomethacin or similar prostaglandin synthetase inhibitors in infants or with surgical ligation or transection. In older children and adults, an increasing number of patients are treated using percutaneous techniques. Surgical treatment is very safe in children and adults unless other defects are associated.