Subdural hematomas (SDH) are 1 of the 3 types of extra-axial intracranial hemorrhages (along with subarachnoid and epidural hemorrhages) and usually occur as a result of trauma. Deceleration injuries are often the cause of subdural bleeding from rupturing of veins via a shearing mechanism. Other entities, such as child abuse and ventricular decompression, also can result in subdural bleeding, and spontaneous hemorrhages may occur in patients receiving anticoagulants or patients with a coagulopathy condition. Compression of a dural sinus does not directly cause a subdural hematoma, although compression may result in a venous infarction.

Chronic subdural hematoma is more common in elderly individuals because of the age-associated decrease in brain volume and the increase in venous fragility. In one study, the mean age of patients with bilateral CSDH was 77 years, and the mean age with unilateral CSDH was 72 years. Although CSDH is considered to be a somewhat benign disease of the elderly, mortality of up to 13% has been reported.

Overall incidence of bilateral CSDH is reported to be 16-20%.

Some subdural hematomas are clinically silent, whereas others cause symptoms as a result of mass effect on the adjacent brain. Some hematomas can grow large enough to result in herniation of cerebral tissue. Before computed tomography (CT) scanning and magnetic resonance imaging (MRI) technology, subdural hematomas were diagnosed only on the basis of this mass effect, which was depicted as displacement of the blood vessels on angiograms or as a calcified pituitary gland on skull radiographs. The advent of CT scan and MRI studies has made the diagnosis of even small hemorrhages routine (see the image below). CSH images may appear as hypodense, isodense, hyperdense, or mixed density.

CT scanning is usually the first evaluation in patients with suspected acute subdural hematoma because CT scans depict acute hemorrhage and skull fractures well, they are relatively fast to obtain, and CT scanning is more readily available than MRI. Smaller hemorrhages may be missed on CT scans inn the nonacute setting, MRI is the study of choice because of its high sensitivity and specificity.
CT scanning may fail to depict small hemorrhages because of the similarity in attenuation between blood and adjacent bone and because of streak artifacts in the posterior fossa and inferior middle cranial fossa. MRI aids in the detection of small hematomas because of its multiplanar capabilities. 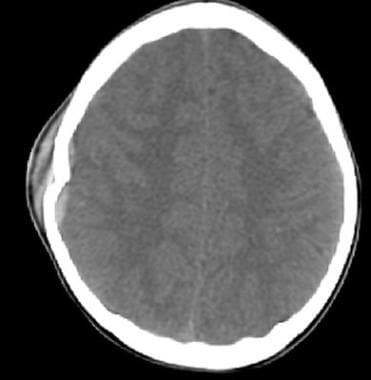 Axial head computed tomography scan demonstrates a skull fracture with an adjacent, small subdural hematoma. Window and level values are widened over standard values, which aids in the detection of small hemorrhages.