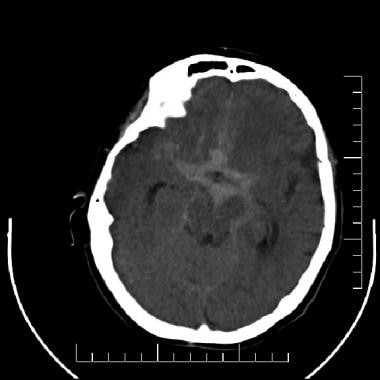 Subarachnoid hemorrhage (SAH). A nonenhanced computed tomography scan of the brain that demonstrates an extensive SAH filling the basilar cisterns in a patient with a ruptured intracranial aneurysm. 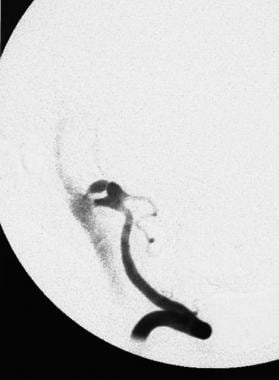 An angiogram showing the onset of an aneurysmal rupture, with extravasation of contrast material into the subarachnoid space from the anterosuperior aspect of a bilobed aneurysm in a posteroinferior cerebellar artery. 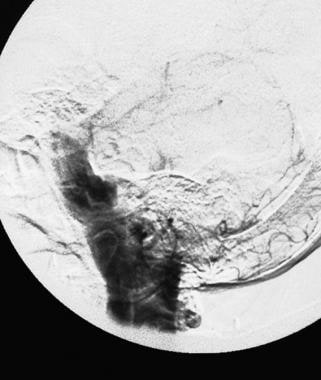 The endovascular treatment of intracranial aneurysms has evolved rapidly. The initial experience in the treatment of intracranial aneurysm with catheter-based techniques relied predominantly on parent-vessel occlusion by various mechanisms, including endovascular detachable balloons and coils. With widespread physician acceptance and approval of the Guglielmi detachable coil (GDC) by the US Food and Drug Administration (FDA), the emphasis of endovascular management has changed to aneurysm occlusion with the preservation of patency of the parent vessel.

Although the primary indication for GDC embolization of an intracranial aneurysm is for patients with surgically high-risk aneurysms, a growing body of evidence indicates that endovascular treatment should be considered as a primary option for aneurysm in certain anatomic locations. Specifically, patients with basilar tip aneurysms appear to have better outcomes with endovascular therapy than with open craniotomy and surgical aneurysm clipping. The technical expertise and experience of the local treating physicians may determine the optimal treatment for aneurysms at other locations.

Computed tomography (CT) scanning without intravenous contrast enhancement is the preferred initial diagnostic study, with cerebral angiography the next procedure of choice.

Advances are being made in the noninvasive vascular imaging modalities of CT angiography and magnetic resonance angiography (MRA). At institutions with a high degree of expertise and experience, these noninvasive imaging technologies may be used in addition to or even replace catheter angiography.

For SAH caused by rupture of an intracranial aneurysmal vessel or arteriovenous malformation, emergency physicians have classically performed a noncontrast CT (NCCT), followed by a lumbar puncture. However, as CT technology has advanced, many studies have questioned the need for lumbar puncture and have advocated for noninvasive techniques, such as NCCT alone or NCCT with CT angiography.

Nonenhanced CT scanning may fail to depict small subarachnoid hemorrhages, particularly if imaging is performed several days after the onset of bleeding. Furthermore, CT scans are degraded by patient motion. If a patient cannot cooperate because of an alteration in mental status, sedation may be necessary to obtain satisfactory diagnostic images.

Cerebral angiography is an invasive procedure with a small but significant risk of complication. Without the use of a special hemostasis device, at least 6 hours of bed rest is required after the procedure to prevent bleeding at the puncture site. Additionally, because of its small false-negative rate for aneurysm, cerebral angiography must be repeated after 1-2 weeks to further improve its diagnostic sensitivity.

Differential diagnosis and other problems to be considered