Neurofibromatosis 2 (NF2) is an inherited autosomal dominant syndrome characterized by multiple schwannomas, meningiomas, and ependymomas.
The most common tumor associated with the syndrome is the vestibulocochlear (cranial nerve [CN] VIII) schwannoma, and as many as 10% of patients with this tumor have NF2. Although it shares a name with neurofibromatosis type 1 (NF1; von Recklinghausen disease), the 2 diseases are separate entities.

Contrast-enhanced MRI is used to screen for NF2 of the brain and spine.
Contrast is important for detecting small schwannomas, particularly of the spinal nerve roots, as well as small intraparenchymal ependymomas.
Newer sequences, such as high-resolution fast spin-echo (FSE) T2 cisternography and true inversion recovery, can aid evaluation of the CNs.

Contrast-enhanced CT scan studies or gas CT cisternography, as well as myelography, have had limited roles since the emergence of MRI, but occasionally, they must be used in patients in whom MRI is contraindicated.

See the images of NF2 below. 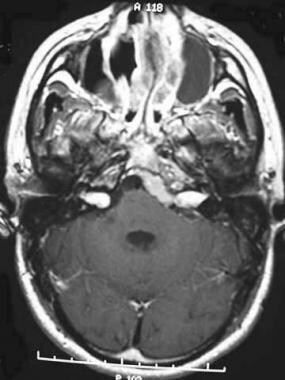 Axial T1-weighted postcontrast image demonstrates bilateral internal auditory canal-enhancing masses that are diagnostic for neurofibromatosis type 2 (NF2). No biopsy is necessary for the diagnosis. Notice the en plaque meningioma anterior to the brainstem.

Sagittal T1-weighted postcontrast image of the thoracic spine demonstrates an enhancing extra-axial meningioma (arrow) anterior to the cord with a complex enhancing mass (arrowheads) that represents a conus ependymoma filling the spinal canal in the lower thoracic spine.

Neurofibromas are rarely found in NF2, which has led some to propose that the disease be termed schwannomatosis or MISME syndrome, the acronym for the following terms
:

The term MISME has become used widely as a mnemonic to remember the disease.

Although a presumed case of NF2 was first described in 1882 by Wishart, the disease was not separated from von Recklinghausen disease until 1987, when it was demonstrated that the 2 disorders arose from different chromosomes. The genetic defect responsible for NF2 is a deletion of a portion of chromosome 22, the same chromosomal abnormality found in spontaneous spinal schwannomas, indicating that a single location causes Schwann cell tumor growth.

A first-degree relative with NF2 and either a unilateral CN VIII mass or 2 of the following: neurofibroma, meningioma, glioma, schwannoma, juvenile posterior subcapsular lenticular opacity

In the past 2 decades, a revision to these diagnostic criteria of NF2 was proposed that concerns the addition of a section for presumptive or probable diagnosis of NF2.

The modified criteria for definite diagnosis of NF2 are as follows:

The modified criteria for presumptive diagnosis of NF2 are as follows:

Baser et al studied 4 different sets of diagnostic criteria and concluded that none of them is adequate in diagnosing patients who do not have bilateral acoustic neuromas at the initial workup. The authors proposed that a single set of diagnostic criteria should be devised to supplant the 4 existing sets, although when or if this will occur is not certain.

Although CN schwannomas, except for CN VIII schwannomas, also occur spontaneously, they are relatively rare. Thus, the presentation of any patient with multiple CN schwannomas, an unusual intracranial schwannoma, or a single CN III (oculomotor), CN IV (trochlear), or CN VI (abducens) schwannoma should prompt screening for NF2. In addition, consider the diagnosis in the workup of patients with multiple extra-axial brain or spine tumors, regardless of whether they are meningiomas or schwannomas.

As a result of its excellent contrast and multiplanar capabilities, MRI optimally depicts the number, size, location, and extent of the central nervous system (CNS) neoplasms found in NF2. However, MRI does not detect most of the ocular abnormalities associated with the disease; these are evaluated best using funduscopy. In addition, cortical and choroid plexus calcifications may be missed on MRI, particularly when using FSE techniques. These are visualized better on CT scan studies.

Gas CT cisternography, in which injected intrathecal gas is maneuvered to outline CN VIII, is more sensitive than routine CT scan studies, but it is also invasive and less sensitive than MRI.

Myelography and CT myelography can depict spinal schwannomas well, but because they cannot be used to visualize intra-axial tumors, they are only indicated when patients cannot undergo MRI.

A CN schwannoma, including a unilateral CN VIII schwannoma or meningioma in a younger patient, suggests the possibility of NF2, which should result in genetic testing and a full MRI of the brain and spine. Older patients with meningiomas or a unilateral CN VIII schwannoma should not undergo an expensive workup for NF2 because the disease usually presents before the age of 40 years. Patients older than 60 years with bilateral internal auditory canal (IAC) masses are unlikely to have NF2 if it has not been diagnosed previously. A few reports of bilateral IAC metastases exist.

NF2 is an autosomal dominant condition. Because NF2 is almost always diagnosed during the reproductive years, patients and their families should receive extensive genetic counseling following diagnosis, and their children should be screened early in life.