As the nucleus pulposus loses its turgor and the elasticity of the anulus diminishes, the disk bulges outward beyond the vertebral body margins, causing bulging of the disk. Herniation of the nucleus pulposus (HNP) through an anular defect causes focal protrusion of the disk material beyond the margins of the adjacent vertebral endplate, resulting in disk herniation.

Trauma is the single most common cause of rupture of the nucleus pulposus through the anulus fibrosus. The result is protrusion or extrusion of the disk material into the vertebral canal. This outcome can be caused by a single event or by repeated trauma. Predisposition to degeneration is also a factor. Alterations in the vertebral endplate cause loss of disk nutrition and disk degeneration.

See the images below regarding disk herniation. 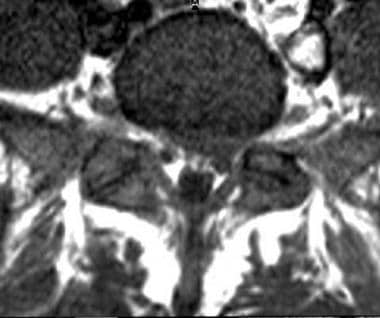 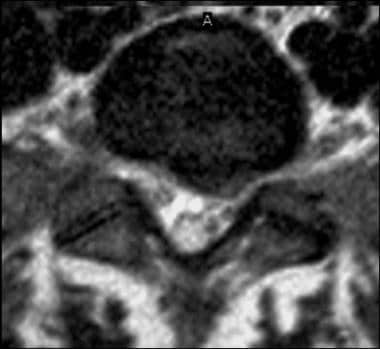 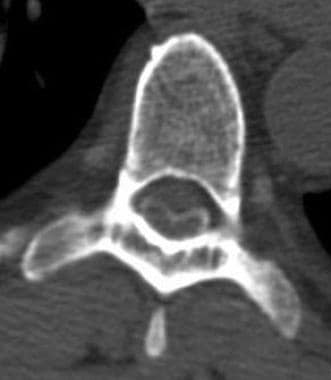 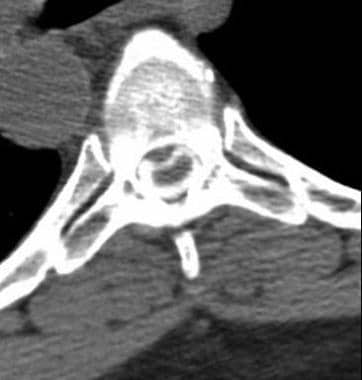 Other potentiating factors include the following
:

Loads placed on the disk

The North American Spine Society (NASS), the American Society of Neuroradiology (ASNR), and the American Society of Spine Radiology (ASSR) are joint task forces overseeing the standardization of the terms used to define conditions of the lumbar disk. This article reflects the work of those task forces. Although the principles and most of the definitions used in this article could easily be applied to the cervical and dorsal spine, the focus is on the lumbar spine.

The term normal applies to disks that are morphologically normal, without consideration of the clinical context. It means they are free of any changes of disease, trauma, or aging. This class does not include disks with degenerative, developmental, or adaptive changes that may be considered clinically normal in some contexts (eg, disks that have undergone typical changes associated with aging, scoliosis, or spondylolisthesis would not be considered normal). However, the bilocular appearance of the adult nucleus resulting from the development of a central horizontal band of fibrous tissue is considered a sign of normal maturation.

Because of confusion in differentiating changes of pathologic degenerative process from those of normal aging, the classification of degenerated disk includes all such changes. Degenerative changes in the disk represent a broad category that includes the subcategories of annular fissure, herniation, and degeneration.

Degeneration may include any or all of the following: real or apparent desiccation; fibrosis; narrowing of the disk space; diffuse bulging of the annulus beyond the disk space; extensive fissuring (eg, numerous annular tears) and mucinous degeneration of the annulus; intradiskal gas; defects and sclerosis of the endplates; and the occurrence of osteophytes at the vertebral apophyses.

Herniation is defined as a localized or focal displacement of disk material beyond the limits of the intervertebral disk space. The disk material may be nucleus, cartilage, fragmented apophyseal bone, annular tissue, or any combination thereof. The endplates of the vertebral body define the disk space cranially and caudally; the outer edges of the vertebral ring apophyses, exclusive of osteophytic formations, define it peripherally. The term localized or focal refers to the extension of the disc material less than 25% (90º) of the periphery of the disc as viewed in the axial plane. To be considered herniated, disk material must be displaced from its normal location and not simply represent an acquired growth beyond the edges of the apophyses. Herniated disks may be considered as protrustion or extrusion.

Trauma includes disruption of the disk associated with physical and/or imaging evidence of violent fracture and/or dislocation and does not include repetitive injury, contribution of less than violent trauma to the degenerative process, fragmentation of the ring apophysis in conjunction with disk herniation, or disk abnormalities in association with degenerative subluxations.

Herniated disk material can be either contained — a term that refers to the integrity of the outer annulus covering the disk herniation — or uncontained. In cases of contained herniation, fluid that is injected into the disk does not leak into the vertebral canal. The test of containment is whether the displaced disk tissues are wholly held within intact outer annulus and/or posterior longitudinal ligament fibers.

Displaced disk fragments are sometimes characterized as free. A fragment should be considered free, or sequestrated, only if there is no continuity of disk material between the fragment and the disk of origin.

The terms migrated disk and migrated fragment refer to displacement of disk material away from the opening in the annulus through which the material extrudes. Some migrated fragments are sequestrated, but the term migrated refers only to the position and not to continuity.

Regarding the posterior longitudinal ligament (PLL), displaced disk material may be described as subligamentous, extraligamentous, transligamentous, or perforated. The term subligamentous is favored as and equivalent to contained. The terms capsule and subcapsular have been used to refer to containment by an unspecified combination of annulus and ligament but are nonpreferred terms.
.

Volume and Composition of Displaced Material

Composition of the displaced material may be characterized by terms such as nuclear, cartilaginous, bony, calcified, ossified, collagenous, scarred, desiccated, gaseous, or liquefied.

From central to right lateral in the axial (horizontal) plane, the location may be defined as central, right central, right subarticular, right foraminal, or right extraforaminal.

Myelography with CT scanning is usually indicated in the following conditions: when surgery is contemplated in cases of spinal stenosis; with lateral recess stenosis; with multiple abnormal disks; with spondylolisthesis; with possible neoplasm; and after severe trauma.

Regarding limitations of MRI, some individuals with implanted devices (eg, pacemakers) or with metal in their body may not be able to undergo MRI because pacemaker dysfunction and/or electrode heating are possible adverse effects of MRI. Although changing the gradient fields can induce currents in leads, the radiofrequency (RF) pulses are typically the cause of inappropriate pacing.

The physician ordering MRI and the MRI staff must determine whether it is safe for the patient to be examined with MRI. Patients undergoing MRI lie on a table that slides into the MRI unit. MRI of the head or neck area requires the patient’s head and upper body to enter a narrow canal. Individuals with claustrophobia may require light sedation to improve their ability to tolerate the closeness of the machine. Although open MRI is an option for patients with claustrophobia, open MRI units are usually equipped with weak magnets (strength measured in Tesla units), which may prevent depiction of fine details. To obtain the best images, the patient must not move during the examination. Some patients and small children undergoing MRI may require sedation to ensure that they remain still.

Although conventional radiographs probably show cortical bone better than MRIs do, the bone marrow is best imaged with MRI, and MRI is superior for demonstrating most bone abnormalities. CT is preferred for unstable patients with severe bleeding. MRI may not always be useful for distinguishing between tumor tissue and edema fluid, and it does not depict calcium well when it is present in a tumor.

MRI is generally avoided during the first 12 weeks of pregnancy, though the hazards of MRI use during this period have not been proven. Severe obesity limits MRI of the spine. Postoperative scarring and/or edema can limit results of the study.

Diagnostic testing for herniated disk includes MRI, CT, myelography, and plain radiography, either alone or in different combinations, as the occasion demands. Surgery should occur only when objective findings of structural defects are correlated with the patient’s symptoms and signs.

Diskography consists of injecting contrast medium into the disk and assessing the patient’s response to the injection. Reproduction of pain similar to the patient’s existing back or neck pain suggests that the disk may be the source. CT performed after diskography is often useful in assessing anatomic changes in the disk and in demonstrating pathology in the disk, including clefts and radial tears.

Early studies indicated that diskography had low specificity, but more recent studies have failed to induce pain in asymptomatic control subjects, suggesting that diskography has utility in identifying patients with diskogenic pain. Pain reproduction during diskography in symptomatic individuals is variable. The incidence of pain reproduction is lower in patients with disk degeneration than in those with posterior tears of the annulus fibrosus or with significant disk bulges.

In essence, when outcomes of fusion procedures are compared, lumbar diskography is sensitive but lacks specificity.

Diskography is recommended only when adequate attempts at conservative therapy and noninvasive diagnostic tests, such as MRI, have failed to reveal the etiology of back pain.

Specific indications for diskography include the following:

Investigation of persistent, severe symptoms when results of other diagnostic tests for identifying the disk that is suspected of being a source of the pain are negative

Evaluation of patients in whom surgery has failed, to determine whether pseudoarthrosis or a symptomatic disk in a posteriorly viewed segment could be the source of pain

Complications associated with diskography include the following
:

Damage to the disk

No known damage occurs to disks on long-term follow-up after diskography. HNP is not a complication related to diskography. With prophylactic use of antibiotics, the incidence of diskitis is significantly reduced.

The Dallas classification of diskography includes the following 7 types:

In type 1, the diskogram is normal manometrically, volumetrically, and radiographically and produced no pain. The diskogram/CT scan shows central contrast enhancement in the axial and sagittal projections.

Type 2 is identical to type 1. In addition, pain is reproducible.

In type 4, once the radial fissure reaches the periphery of the anulus fibrosus, nuclear material may protrude, causing the outer annulus to bulge.

In type 5, when the outer anular fibers rupture, nuclear material may extrude beneath the PLL and come into direct contact with either the dura or a nerve root.

In type 6, the extruded fragment is no longer in continuity with the interspace; such fragments are said to be sequestrated. Manometrically, volumetrically, and radiographically, the diskograms are always abnormal. Familiar pain may be reproduced only if enough pressure is generated against the free fragment so as to stimulate the pain-sensitive structures.

Type 7, which is the end stage of degeneration, involves internal disk disruption characterized by multiple anular tears. The diskograms are abnormal manometrically and volumetrically, and familiar pain may or may not be reproduced. Radiographically, contrast agent usually fills the entire interspace in a chaotic fashion. The diskogram/CT scan shows extravasation of contrast material throughout multiple annular tears.

Other interventions include imaging procedures necessary to aid in the injection procedures and to supplement and enhance already applied active treatment in motion. They include the following: