Choroid plexus papilloma is a rare, slow-growing, histologically benign intracranial neoplasm that is commonly located in the ventricular system. These tumors account for 0.4-0.6% of all intracranial neoplasms; in children (mean age, 5.2 yr), choroid plexus papillomas appear as large tumors and account for 1.5-6.4% of intracranial neoplasms. Papillomas are a surgically curable disease. In a study of 18 consecutive choroid plexus tumors, the mean age at presentation was 4.6 years. All patients underwent surgical resection. The survival rate was 100% for papillomas (mean follow-up for 73 mo). The survival rate of carcinomas was 50% (mean follow-up for 23.5 mo). Postoperative extraventricular drainage has been shown to be effective in lowering the rate of shunt requirement in these patients, probably through releasing the blood-tinged cerebrospinal fluid and small tumor-particle residue.

Computed tomography (CT) scanning and magnetic resonance imaging (MRI) are the investigative procedures of choice in the evaluation of choroid plexus papillomas. Because of the relatively noninvasive nature, ease, widespread availability, high reproducibility, and great contrast resolution of CT scanning and MRI, these examinations have supplanted all other methods of neuroimaging. With the addition of intravenously administered contrast material, the sensitivity of these imaging modalities approaches 100%. The multiplanar capability of MRI further aids in the characterization and localization of lesions. 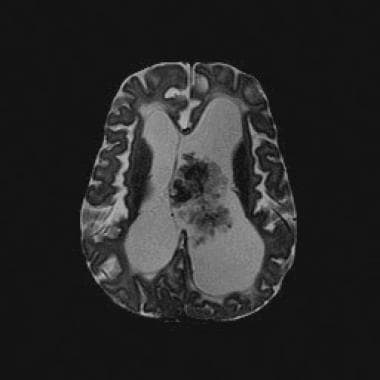 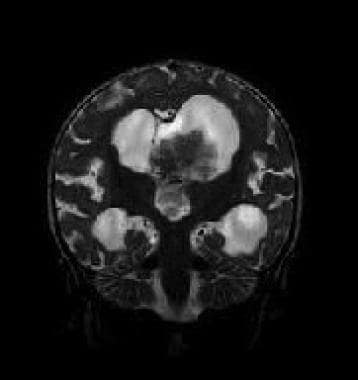 Interventricular extension through the foramen of Munro, cerebral aqueduct, or foramen of Luschka or Magendie can occur with a choroid plexus papilloma; this is an ancillary diagnostic sign that is not described with other interventricular tumors.

Although choroid plexus papillomas are readily apparent on most nonenhanced studies, the omission of enhanced imaging from the imaging protocol may result in incorrect conclusions about the tumor type and extent. In addition, misdiagnosis may result from an attempt to classify a choroid plexus tumor as benign or malignant solely on the basis of imaging characteristics.