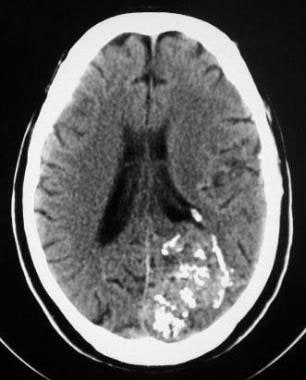 A CT scan of the head that demonstrates a left occipital arteriovenous malformation (AVM), with multiple calcified phleboliths and numerous hyperattenuating vascular channels. 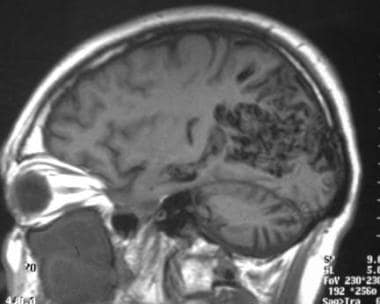 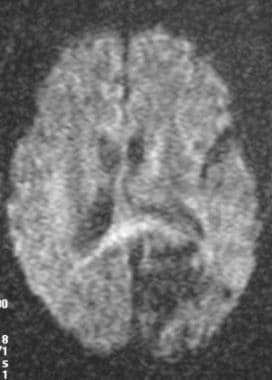 A diffusion-weighted MRI showing a lack of signal intensity associated with an arteriovenous malformation (AVM). 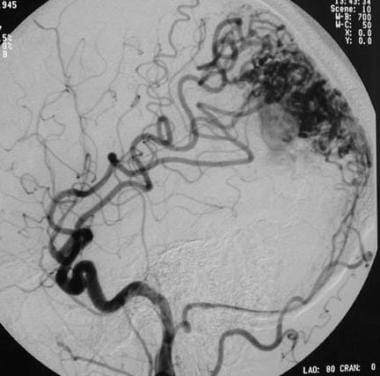 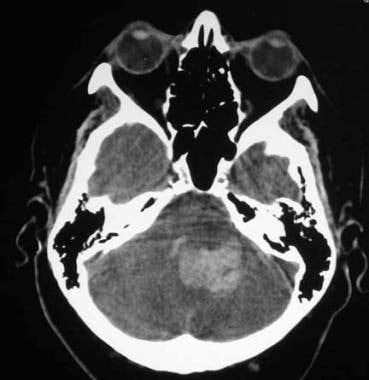 Arteriovenous malformation (AVM) of the brain. A CT scan of the posterior fossa demonstrating a hemorrhage in the fourth ventricle, with extension to the left cerebellum.

Pial arteriovenous malformations tend to be asymptomatic until the second, third, or fourth decade of life. They most commonly manifest as spontaneous hemorrhage or seizure. Other clinical signs include headache and transient or progressive neurologic deficit. Dural arteriovenous malformations typically feature pulsatile tinnitus, cranial bruits, headaches, or hemifacial spasm. Infants with a vein of Galen malformation may present with hydrocephalus or severe congestive heart failure.

The first imaging study that is performed in patients with a suspected AVM is usually a computed tomography (CT) or magnetic resonance imaging (MRI) scan. These studies are good for depicting AVMs and they are relatively noninvasive, only requiring an injection of contrast material into a small vein. Overall, arteriovenous malformations are best imaged by using MRI, which can uniquely show these lesions as a tangle of vascular channels that appear as flow voids. Nonenhanced CT is superior for visualizing the small foci of calcification often associated with arteriovenous malformations, and it may also delineate hyperattenuating serpiginous vessels the constitute the nidus.

Nonenhanced CT scanning is valuable for demonstrating the extent of acute hemorrhage and hydrocephalus. Contrast-enhanced CT shows enhancement of the typical vascular channels. Magnetic resonance angiography (MRA) or CT angiography (CTA) may be adequate for initial or follow-up evaluation of an arteriovenous malformation. Demonstration of the aneurysms sometimes found on arteriovenous malformation feeding arteries may be accomplished by means of MRA, CTA, or catheter angiography.

CT scanning of the brain is the imaging test for evaluating acute headache or other acute mental status changes suggestive of acute cerebral hemorrhage. Detection of a lobar hemorrhage can suggest an underlying mass or AVM. Cerebral CT scanning can be used to identify areas of acute hemorrhage, and the results can suggest a vascular malformation, particularly with the judicious use of contrast material. Furthermore, CT scanning can uniquely demonstrate vascular calcifications associated with AVMs.

MRI can help identify and characterize AVMs of the CNS, including the brain and spinal cord, without the use of radiation or invasive techniques. MRI is the examination of choice in patients with chronic headaches, seizure disorders of unknown etiology, and pulsatile tinnitus (among other conditions).

MRI typically follows CT scanning in the acute setting of neurologic illness when an underlying vascular lesion, such as an AVM, is suggested. MRI scans can demonstrate areas of parenchymal AVM involvement, showing both dilated feeding arteries and enlarged draining veins.

MRA and venography can further supplement conventional MRI in demonstrating in a near angiographic fashion the anatomy and microarchitecture of an AVM.
MRI is the study of choice in the detection of vascular malformations of the spinal cord and spinal dura.
High-speed functional MRI with multi-slab echo-volumar imaging is an additional diagnostic tool.

Catheter angiography remains the criterion standard for characterization and delineation of brain and spinal AVMs. Angiography is a dynamic real-time study that not only demonstrates the presence or absence of an AVM, but also shows vascular transit time. Diagnostic angiography is uniquely able to delineate the size and number of feeding arteries, and it can define the pial, dural, or mixed origin of the AVM.

Angiography can reveal certain features that are believed to correlate with an increased risk of hemorrhage. These features include the presence of associated intranidal, remote, or pedicular aneurysms; central or deep venous drainage; stenosis of a draining vein; and a periventricular or intraventricular location.

CT scanning is an excellent examination for detecting cerebral hemorrhage, but it can miss an underlying AVM. AVMs are typically isoattenuating relative to normal parenchyma and, therefore, can be overlooked, particularly if a contrast agent is not administered. In an emergency setting, the administration of an iodinated contrast agent is typically deferred in favor of patient stabilization. Contrast-enhanced CT scanning also poses an inherent risk of radiation and, because of its cost, MRI may be a better screening examination for AVM in the general population. Contrast-enhanced CT scanning is performed to detect cerebral AVM, however, when MRI is contraindicated or otherwise not feasible.

On CT scans, an AVM that appears as a noncalcified mass or a calcified and hyperattenuating focal mass must be distinguished from other calcified masses, such as tuberous sclerosis, colloid cysts, neoplasms, and aneurysms.

Possible causes (in addition to vascular malformation) for parenchymal hematomas seen on CT scans include trauma; coagulopathy; hypertension; other vascular pathologies, such as aneurysm, amyloid angiopathy, or vasculitis; vascular occlusion, as from a venous infarct or embolic stroke with reperfusion hemorrhage; infection; and neoplasm.

MRI is excellent for demonstrating the AVM nidus and abnormal flow voids typical of an AVM; however, in acute cerebral hemorrhage, compressed AVMs may no longer demonstrate flow and may, therefore, be overlooked. This may lead to the need for serial MRI studies to search for an underlying cause of cerebral hemorrhage not shown on a single MRI study. MRI can cause underestimation of the number of feeding arteries and associated aneurysms, which might also be missed. Furthermore, MRI can have a relatively poor sensitivity in detecting dural malformations. Gadolinium-based contrast material may be needed to demonstrate abnormal vascular channels.

Gadolinium-based contrast agents have been linked to the development of nephrogenic systemic fibrosis (NSF) or nephrogenic fibrosing dermopathy (NFD). For more information, see the eMedicine topic Nephrogenic Systemic Fibrosis. The disease has occurred in patients with moderate to end-stage renal disease after being given a gadolinium-based contrast agent to enhance MRI or MRA scans. NSF/NFD is a debilitating and sometimes fatal disease. Characteristics include red or dark patches on the skin; burning, itching, swelling, hardening, and tightening of the skin; yellow spots on the whites of the eyes; joint stiffness with trouble moving or straightening the arms, hands, legs, or feet; pain deep in the hip bones or ribs; and muscle weakness. For more information, see Medscape.

Dark areas on T2-weighted MRIs can be caused by rapid blood flow, as from an AVM, aneurysm, or neoplasm; dense calcification, as from an AVM, infection, or neoplasm; or a variety of other causes not associated with vascular malformations. These include the presence of air, minerals or metals, hemorrhage, and mucinous or dense proteinaceous material.

Diagnostic angiography is the criterion standard for the evaluation of AVMs; however, it is invasive and carries risks related to catheter placement, contrast agents, and their injection. Specific neurangiographic risks include stroke, arterial dissection, reactions to the contrast material, and renal insufficiency and/or failure (among others). Nevertheless, modern cerebral angiography remains a safe and reliable method for AVM analysis, with an overall complication rate of less than 1%. Spinal angiography can be tedious and is associated with the risk of spinal cord infarction.