The introduction of infectious agents results in various responses from the central nervous system (CNS). In the earliest stage of purulent bacterial brain infection, the generalized initial reaction is cerebritis. Within the background of cellular response to the infection, cerebritis evolves into a localized abscess in a predictable series of stages. Neuroimaging of these stages reflects the underlying pathophysiology of abscess formation. Variations in the brain’s reaction at different locations and similarities in the brain’s reaction to certain agents and in the appearances of aggressive neoplasms all require correlation of medical history, neuroimaging, and results of microbiologic analysis.

Brain abscess may result from a traumatic brain injury, neurosurgical procedures, contiguous spread from a local source, or hematogenous spread of a systemic infection.
Immunosuppressed patients, especially those patients who have received an organ transplant, are susceptible to the development of cerebral infections.
Pyogenic infection of brain parenchyma begins with cerebritis, a localized area of inflammation, which can progress to an immature capsular stage and then to brain abscess, which is characterized by an area of parenchymal infection that contains pus encapsulated by a vascularized membrane. Clinical symptoms of brain abscess include focal neurologic deficits and increased intracranial pressure.
Brain abscesses may also present as nonspecific findings that are suggestive of other conditions.
Cranial nerve involvement may present a confusing clinical pattern.

In the earliest stages of the evolution of a cerebral abscess, a CT scan of the brain may be negative or it may show subtle nonspecific findings. MRI of the brain performed without and with a gadolinium contrast agent is the more sensitive test. The enhancement seen on MRI following intravenous contrast is relatively more sensitive and somewhat more specific than CT.

The preferred initial examination of the patient in whom brain abscess is suspected is MRI with and without gadolinium enhancement. Similar diagnostic results can be expected from cranial CT scans without and with the intravenous administration of iodinated contrast medium. Both imaging techniques help detect the mass effect of the abscess; however, findings in MRI with a diffusion protocol are more specific in differentiating cerebral tumor, stroke, and abscess. In particular, examination of the metabolite peaks with MR spectroscopy can help to specifically differentiate tumor, radiation necrosis, and abscess by identifying their different spectral profiles.

In the early stage of cerebritis, noncontrast CT may show localized hypoattenuation, and contrast enhancement is variable but, if present, may show a nodular or ringlike pattern. When a capsule forms, a round or ovoid area of hypoattenuation will be seen with ring enhancement that dissipates on delayed images.

Occasionally, distinguishing brain abscess from neoplasm or postoperative changes from infection is difficult. In these patients, a nuclear agent can be used to tag white blood cells or antibodies to help differentiation.

Sepahdari et al found that in 9 cases of orbital cellulitis, including 6 cases of pyogenic abscess, diffusion-weighted imaging confirmed abscess in a majority of cases without contrast-enhanced imaging. According to the authors, this may be of particular importance in patients in whom the use of contrast is contraindicated. Diffusion-weighted imaging improved diagnostic confidence in virtually all the patients with orbital abscess when it was used along with contrast-enhanced imaging.

Early and improved diagnostic imaging techniques have allowed the discovery of brain abscess at a much earlier stage. (See the images below.) 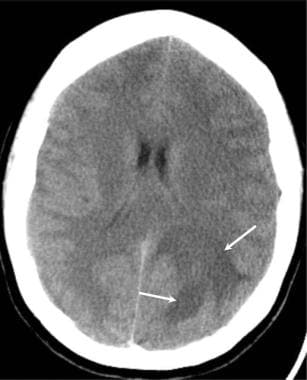 Brain abscess. Axial CT scan in a patient who presented with a headache, fever, and a history of a recent pneumonia demonstrates a poorly defined area of posterior parietal brain edema (arrows). Early cerebritis may not outline a focal mass clearly. 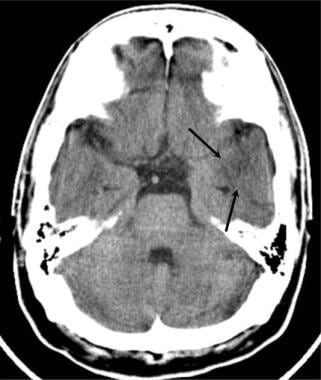 Brain abscess. Axial nonenhanced cranial CT scan in a patient who presented with fever, headache, and a previous paranasal sinus infection demonstrates a poorly defined pattern of mass effect and low attenuation in the left temporal lobe. The pattern is consistent with possible early cerebritis; however, glioma and infarct may have similar presentations. 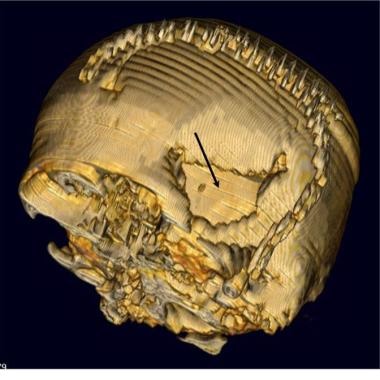 Brain abscess. Three-dimensional surface model of a cranial CT scan in a patient with a postcraniotomy abscess. The large deformity in the skull indicates the route of abscess spread. 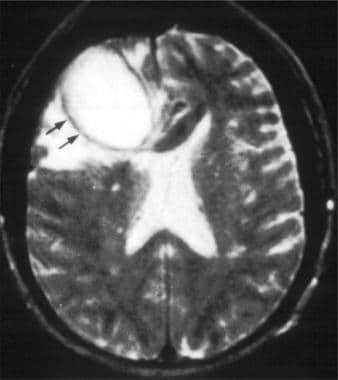 Brain abscess. Axial T2-weighted MRI in a patient with a right frontal abscess. Note the mass effect and surrounding edema. The wall of the abscess is relatively thin (black arrows).

Brain abscesses may occur as a result of direct skull trauma or following surgery. The spread of infection from the paranasal sinuses, the middle ear and the mastoid air cells, a tooth abscess, or by hematogenous spread from the lungs or heart are other potential infectious mechanisms. See the images below.

Brain abscess. Three-dimensional surface model of a cranial CT scan in a patient with a postcraniotomy abscess. The large deformity in the skull indicates the route of abscess spread. 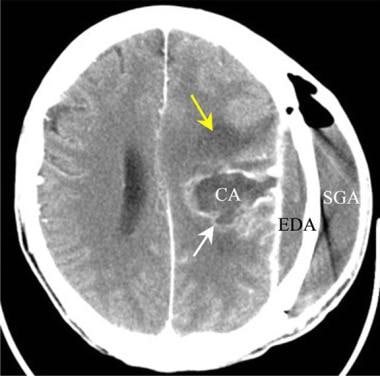 Brain abscess. Axial contrast-enhanced CT scan in a patient who was treated surgically for a depressed skull fracture. The left parietal cranial injury has become complicated by an abscess of the subgaleal space (SGA), of the epidural space (EDA), and within the left cerebral hemisphere (CA). Edema related to the abscess is indicated by the yellow arrow. The cerebral abscess wall enhances (white arrow). 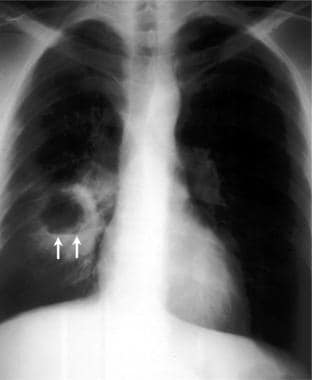 Brain abscess. Anterior view of a chest radiograph in a patient with thick-walled right lung abscess. The patient later developed a brain abscess.

Brain abscess. Gadolinium-enhanced coronal T1-weighted MRI in a patient who presented with headache, fever, and diplopia. The right frontal lobe of the brain is shifted across the midline (double arrow) by an intracranial abscess (single black arrow) that has extended upward from the medial right orbit and medial ethmoid air cells (curved dotted arrow). Aspergillus organisms were recovered from the sinuses and brain tissue. 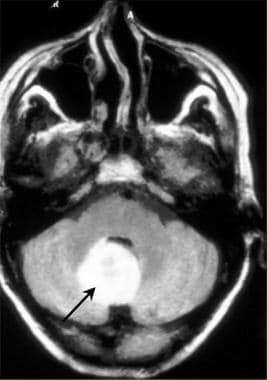 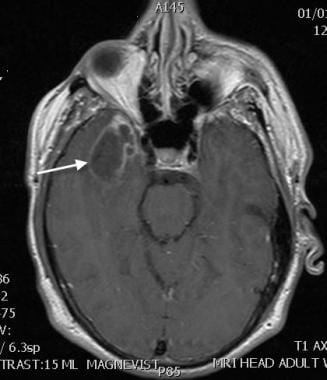 Cerebral abscess. This T1 contrast-enhanced MRI of a right temporal abscess demonstrates an irregular mass with moderate peripheral enhancement. This image was obtained early in the clinical course. The etiology of the brain abscess was an abscessed tooth.

Plain radiographs of the paranasal sinuses can only suggest a possible etiology for cerebral abscess. Early findings of CT examinations are not specific for cerebral abscess. The edema pattern and moderate mass effect cannot be differentiated from tumor or stroke in some patients. MRI findings in patients with cerebritis may resemble findings in stroke, while findings in the infarcts that result from vasculitis and cerebritis may resemble those of embolic strokes. Nuclear medicine single photon emission computed tomographic (SPECT) findings are not specific for brain abscess unless a white cell tag is used.

Follow-up scans for certain infectious agents, such as M tuberculosis, may be necessary because infection by these organisms may not follow a predictable response to treatment. Tuberculosis-related brain abscesses that retain positive results to culture and smears following 4 weeks of treatment may not represent treatment failure. In addition, treatment of fungal infections may require many weeks of treatment with interval follow-up imaging studies. Follow-up imaging during the treatment for toxoplasmosis is important in avoiding brain biopsy.

Intervention in patients with cerebral abscess is most commonly limited to biopsy and aspiration of infectious material that may represent the origin of a CNS infection. Aspiration and biopsy of small lesions is performed best using a CT-guided computer-assisted technique or with the aid of an external frame, which (with the aid of CT data) directs the placement of the aspiration needle. More recently, fully computer-aided virtual imaging programs have provided greater flexibility in the application of both CT and MRI sets during craniotomy procedures and in the aspiration of selected lesions. Intraoperative ultrasonography may aid in the detection and treatment of relatively large superficial abscess collections.