Before the advent of magnetic resonance imaging (MRI), imaging of the cranial nerves (CNs) was difficult, and mass lesions arising from these nerves was often indirectly detected only by looking at bony changes in the skull base foramen or by using invasive techniques such as cisternography and angiography. Current imaging techniques provide noninvasive highly detailed imaging of most of the CNs and the lesions (eg, schwannomas) that affect them.

Patients with CN schwannomas can present with loss of function of the affected nerve, but they can also be asymptomatic. In these latter patients, the lesion may be incidentally discovered on computed tomography (CT) scans or MRIs obtained for reasons other than the evaluation of a schwannoma.

CN schwannomas are usually isolated lesions, except when they are associated with neurofibromatosis type 2.
NF2 is also called the multiple inherited schwannomas, meningiomas, and ependymomas (MISME) syndrome. NF2 is characterized by bilateral vestibular schwannomas. Schwannomas of the other CNs occur more frequently in NF2, and the presence of one of the rare CN schwannomas should suggest the possibility of NF2. Meningiomas and intramedullary ependymomas of the spinal cord also occur in NF2.

Schwannomas can arise from all cranial nerves except the optic. They can also occur in spinal nerve roots, flexor surfaces of the upper and lower extremities, and the tongue.
In NF2, the eighth cranial nerve is affected, and the classic finding is a bilateral vestibular schwannoma.

Schwannomas are slow-growing, benign, encapsulated neoplasms that arise from the nerve sheath and consist of Schwann cells in a collagenous matrix.
These lesions account for 6-8% of intracranial neoplasm; vestibular schwannomas are the most common CN schwannomas, followed by trigeminal
and facial schwannomas and then glossopharyngeal, vagus, and spinal accessory nerve schwannomas. A study of patients undergoing MRI for indications other than the evaluation of schwannoma revealed an estimated prevalence of 0.07%.

Varying growth patterns in schwannomas are described as Antoni type A neurilemoma and type B neurilemoma. Although type A tissue has elongated spindle cells arranged in irregular streams and is compact in nature, type B tissue has a looser organization, often with cystic spaces intermixed within the tissue. The cystic spaces can result in high signal intensity on T2-weighted MRIs. Schwannomas involving the oculomotor, trochlear, abducens, and hypoglossal nerves are rare. See the images below.

MRI with the use of gadolinium-based contrast medium is the technique of choice for imaging the CNs.
MRI provides the highest degree of soft-tissue resolution, can provide images in multiple planes, and is not encumbered by bone artifact from the skull base. CT scanning is ideal for evaluating the secondary effects on the neural foramen.
Aside from a patient’s claustrophobia or incompatible hardware, the only significant imaging drawback of MRI is that CT scanning can be more sensitive in depicting adjacent bone destruction.

CT evaluation may be limited primarily to the assessment of bony changes in the skull base. On contrast-enhanced CT a schwannoma displays heterogeneous enhancement
Artifact from the skull base limits the soft-tissue resolution of CT scans, particularly in small lesions.
Plain radiography has no role in the evaluation of the lesions.

Schwannomas on ultrasound are characterized by round or elliptical cross-section, with a clear border and an internal echo. Ultrasound may have greater diagnostic utility in cases in which the nerve diameter is large and the tumor is connected to the nerve. 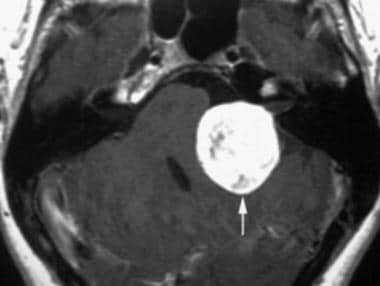 Contrast-enhanced T1-weighted magnetic resonance image at the level of the internal auditory canal shows a strongly enhancing cisternal vestibular schwannoma (arrow) that compresses the adjacent pons and cerebellum and distorts the fourth ventricle. 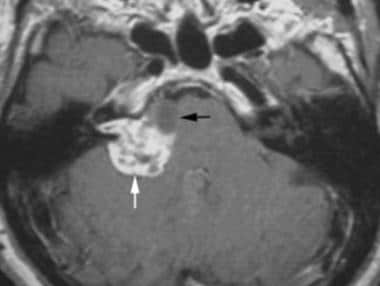 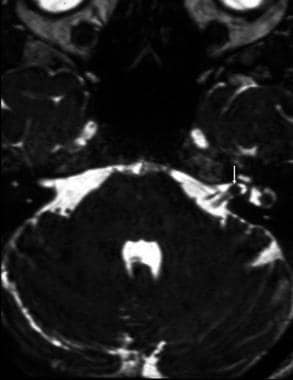 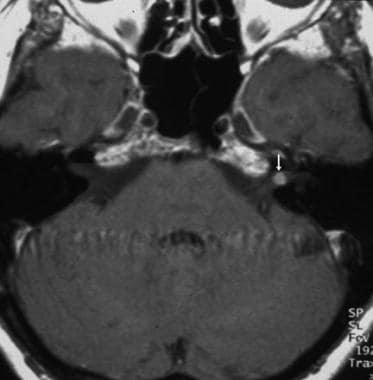 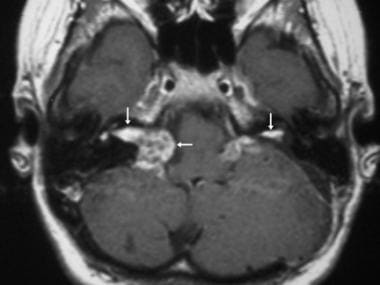 Motor neurons of the oculomotor nerve (ie, CN III) leave the midbrain at the level of the tegmentum and emerge in the interpeduncular cistern. Here, it passes between the posterior cerebral artery (PCA) above) and the superior cerebellar artery (SCA) below, and it turns anteriorly to enter the cavernous sinus. In the cavernous sinus, the oculomotor nerve courses along the lateral wall; it is the most superior of all the nerves in the sinus. The nerve enters the orbit via the superior orbital fissure and then splits into superior and inferior divisions.

The trigeminal nerve (ie, CN V) exits the brainstem at the level of the mid pons, and its 3 divisions—the ophthalmic (CN V1), maxillary (CN V2), and mandibular (CN V3) branches—together proceed anteriorly toward the trigeminal ganglion in the Meckel cave, as shown in the image below. From here, the mandibular division exits inferiorly via the foramen ovale. The maxillary and ophthalmic divisions continue anteriorly along the lateral aspect of the cavernous sinus. Eventually, the ophthalmic division enters the orbit via the superior orbital fissure, while the maxillary division exits the cranial vault through the foramen rotundum. 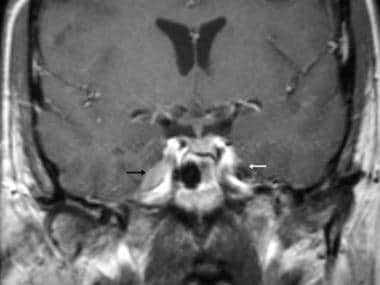 The abducens nerve (ie, CN VI) exits the brainstem ventrally at the level of the junction of the pons and medullary pyramid and courses anterolaterally toward the dorsum sellae, passing over the petrous apex where it makes a sharp turn to enter the cavernous sinus. In the sinus, the abducens nerve is medial to CN IV, CN V1, and CN V2. Along with the oculomotor and trochlear nerves, the abducens nerve also enters the orbit via the superior orbital fissure, then enters the deep surface of the lateral rectus muscle.

The facial nerve enters the labyrinth (labyrinthine segment), courses anteriorly in the temporal bone to the geniculate ganglion, turns posteriorly to pass beneath the lateral semicircular canal (tympanic segment) and then inferiorly to course through the mastoid (vertical segment), and exits the temporal bone via the stylomastoid foramen. Finally, the facial nerve courses within the parotid gland (parotid segment) before branching.

The hypoglossal nerve (CN XII) is formed by the fusion of multiple rootlets that emerge from the ventrolateral sulcus between the medullary olive and pyramid. The nerve exits the cranial vault via the hypoglossal canal, then lies medial to CN IX, CN X, and CN XI.

Differentials and other problems to be considered

The differential diagnosis varies with the location, but meningiomas can occur in similar regions and have similar imaging appearances as schwannomas. The differing growth patterns, as well as the dural tail and associated hyperostosis that can be seen with meningiomas, are often helpful differentiating factors. See the image below. 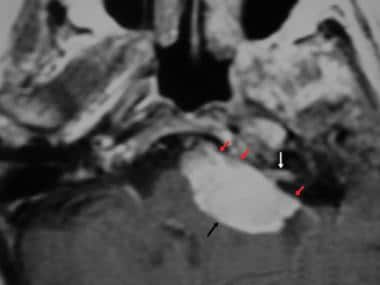 Cerebrospinal fluid (CSF) spread of metastatic disease or lymphoma can appear as a focal CN mass. In patients with carcinomatous meningitis and lymphoma, focal metastatic masses can involve the cranial nerves and mimic a schwannoma. See the images below. 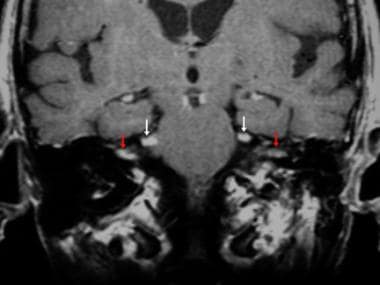 Neuritis (ie, inflammation of a nerve) can be confused with a mass. See the images below. 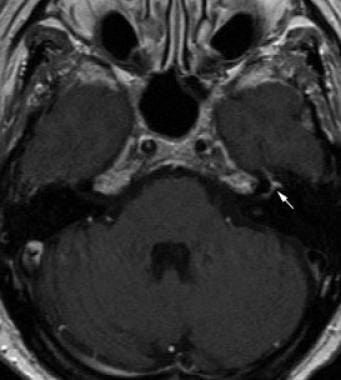 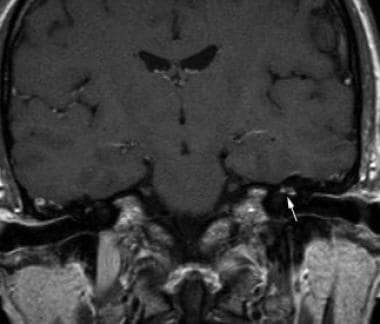 NF2 is one of the phacomatoses characterized by multiple intracranial schwannomas, meningiomas, and ependymomas. Bilateral vestibular schwannomas are diagnostic of this entity, but patients can have schwannomas involving any CN (CN III-XIII). See the image below.

Other conditions to be considered include glomus tumors of the head and Neck and NF1.

Stereotactic radiosurgery (SRT) (ie, gamma knife radiosurgery) largely has replaced surgical resection for the treatment of vestibular schwannomas, particularly when the lesions do not compress the brainstem. Lesions should be smaller than 3 cm. Studies have demonstrated rates of tumor control (ie, lesion stabilizes or shrinks) of greater than 95% and a rate of hearing preservation of approximately 70%. Although less well studied, other CN schwannomas also can be treated with radiosurgery.

Nishioka et al demonstrated stereotactic radiotherapy is an effective alternative to surgical resection for patients with nonacoustic intracranial nerve schwannomas not only for long-term local tumor control but also preservation of neurofunction.
Following stereotactic radiotherapy, tumor size decreased in 3 patients, remained stable in 13, and increased in 1. Neurologic symptoms improved in 8 patients and remained unchanged in 9 patients. In 1 patient, an increase in tumor size necessitated microsurgical resection. No worsening of neurologic symptoms or development of new cranial nerve deficits was reported.

Failure to perform MRI when CN tumors are suggested is a concern. In particular, CT scans of the brain are inadequate for evaluating CNs, and the reliance of negative CT findings to exclude a CN lesion may lead to liability.