Glioblastoma multiforme (GBM) is the most common and most malignant of the glial tumors.
See the image below. 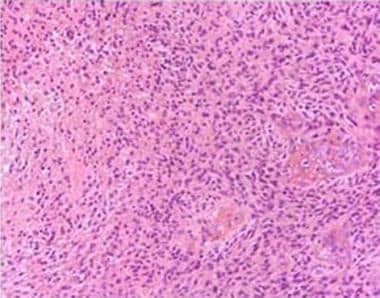 See Brain Lesions: 9 Cases to Test Your Management Skills, a Critical Images slideshow, to review cases including meningiomas, glioblastomas and craniopharyngiomas, and to determine the best treatment options based on the case history and images.

The clinical history of a patient with glioblastoma multiforme (GBM) is usually short (< 3 months in > 50% of patients). Common presenting symptoms include the following:

Neurologic symptoms and signs can be either general or focal and reflect the location of the tumor, as follows:

The etiology of GBM is unknown in most cases. Suggested causes include the following:

No specific laboratory studies are helpful in diagnosing GBM. Tumor genetics are useful for predicting response to adjuvant therapy.

Imaging studies of the brain are essential for making the diagnosis, including the following:

Magnetic resonance imaging, with and without contrast (study of choice)

Cerebral angiography is not necessary

Other diagnostic measures that may be considered include the following:

Electroencephalography: May show suggestive findings, but findings specific for GBM will not be observed

In most cases, complete staging is neither practical nor possible. These tumors do not have clearly defined margins; they tend to invade locally and spread along white matter pathways, creating the appearance of multiple GBMs or multicentric gliomas on imaging studies.

No current treatment is curative. Standard treatment consists of the following:

To establish a pathologic diagnosis

To relieve any mass effect

If possible, to achieve a gross total resection to facilitate adjuvant therapy


In some cases, stereotactic biopsy is followed by radiation therapy (eg, for patients with a tumor located in an eloquent area of the brain, patients whose tumors have minimal mass effect, and patients in poor medical condition who cannot undergo general anesthesia). The extent of surgery (biopsy vs resection) has been shown in a number of studies to affect length of survival.

Key points regarding radiotherapy for GBM include the following:

The addition of radiotherapy to surgery increases survival.

The responsiveness of GBM to radiotherapy varies.

Radiosensitizers, such as newer chemotherapeutic agents,
targeted molecular agents,
and antiangiogenic agents
may increase the therapeutic effect of radiotherapy.

Radiotherapy and/or radiosurgery for recurrent GBM is controversial.

The optimal chemotherapeutic regimen for GBM is not yet defined, but adjuvant chemotherapy appears to yield a significant survival benefit in more than 25% of patients.

Agents used include the following:

Bevacizumab (alone or with irinotecan) for recurrent cases