To define abnormal labor, a definition of normal labor must be understood and accepted. Normal labor is defined as uterine contractions that result in progressive dilation and effacement of the cervix. By following thousands of labors resulting in uncomplicated vaginal deliveries, time limits and progress milestones have been identified that define normal labor. Failure to meet these milestones defines abnormal labor, which suggests an increased risk of an unfavorable outcome. Thus, abnormal labor alerts the obstetrician to consider alternative methods for a successful delivery that minimize risks to both the mother and the infant.

Dystocia of labor is defined as difficult labor or abnormally slow progress of labor. Other terms that are often used interchangeably with dystocia are dysfunctional labor, failure to progress (lack of progressive cervical dilatation or lack of descent), and cephalopelvic disproportion (CPD).

The second stage of labor is defined as complete dilation of the cervix to the delivery of the infant.

The third stage of labor involves delivery of the placenta.

See images below for the normal labor curves of both nulliparas and multiparas. The following table shows abnormal labor indicators. 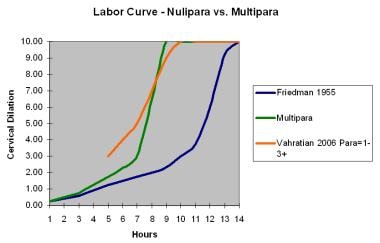 Labor curve for nulliparas versus multiparas.

Abnormal labor constitutes any findings that fall outside the accepted normal labor curve. However, the authors hesitate to apply the diagnosis of abnormal labor during the latent phase because it is easy to confuse prodromal contractions for latent labor. In addition, the original labor curve, as defined by Friedman, may not be completely applicable today. 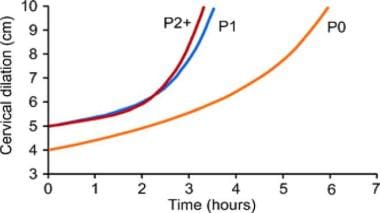 The 95th percentiles of cumulative duration of labor from admission among singleton term nulliparous women with spontaneous onset of labor, vaginal delivery, and normal neonatal outcomes. Reprinted from Seminars in Perinatology, Vol 36(5), El-Sayed YY, Diagnosis and Management of Arrest Disorders: Duration to Wait, pgs 374-8, Oct 2012, with permission from Elsevier.

As stated above, first stage of labor is divided into latent and active phases. According to Friedman et al., latent stage considered to be prolonged if takes >20 hours for nulliparous women and >14 hours for multiparous women. However, prolonged latent phase does not usually lead to any clinically significant adverse events for mother or the infant. Therefore, diagnosis of abnormal labor during the latent phase is uncommon and is not relevant for clinical practice.

Around the time uterine contractions cause the cervix to become 3-4 cm dilated, the patient usually enters the active phase of the first stage of labor, according to the traditional definition. Abnormalities of cervical dilation (protracted dilation and arrest of dilation) as well as descent abnormalities (protracted descent and arrest of descent) as described historically are outlined in the Table above.

Both American College of Obstetrics and Gynecology (ACOG) and the Consortium on Safe Labor have proposed extending the minimum period before diagnosing active-phase arrest. The Consortium on Safe Labor defines 6 hours as the 95th percentile of time to go from 4 cm to 5 cm dilation, with the active phase defined as beginning at 6 cm (instead of 4 cm). According to this study, the 95th percentile of rate of dilation in active phase is 0.5 cm/hr to 0.7 cm/hr for nulliparous women and from 0.5 cm/h to 1.3cm/hr for multiparous women.
ACOG has also stated that extending the time from 2 to 4 hours with oxytocin augmentation appears effective. Irrespective of the duration, maternal and fetal well-being status must be confirmed. In another study it was found that extending oxytocin augmentation for an additional 4 hours, up to 8 hours total, in patients who were dilated at least 3cm and had unsatisfactory progress resulted in a greater number of vaginal deliveries (38% delivered vaginally) without any evidence of fetal compromise.

The maternal risk of a first stage greater than the 95th percentile (>30 h) is associated with a higher cesarean delivery rate (adjusted odds ratio [aOR]: 2.28) and chorioamnionitis (aOR: 1.58). The neonatal risk is associated with a higher incidence of neonatal ICU admissions in the absence of any other of the major morbidities (aOR: 1.53).
These results were again confirmed by another study, which established that prolonged first stage of labor lead to increased risks of a prolonged second stage, maternal fever, shoulder dystocia, and admission to a level 2-3 nursery

The Consortium on Safe Labor also addressed the 95th percentile for the second stage for nulliparous women; it was 2.8 hours (168 min) without regional anesthesia and 3.6 hours (216 min) with regional anesthesia. For multiparous women, the 95th percentiles for second-stage duration with and without regional anesthesia remained around 2 hours and 1 hour, respectively.
However, other studies demonstrate the risks of both maternal and perinatal adverse outcomes rising with increased duration of the second stage, particularly for durations longer than 3 hours in nulliparous women and 2 hours in multiparous women.
One study found that if nulliparous women delivered after prolonged second stage, they were twice as likely to have operative vaginal delivery, three times as likely to develop chorioamnionitis, have higher odds of having episiotomy and 3rd or 4th degree lacerations, and one day longer median hospital stay.
.Thus, careful clinical assessment of fetal and maternal well-being must be confirmed when extending the duration of the first and second stages of labor.

The third stage of labor is the time from delivery of the infant to placental delivery. Historically, the duration of a normal third stage of labor was defined as less than 30min. This threshold was established by the study conducted by Combs et al. in 1991, in which 75% of placentas were delivered by 10 minutes and maternal morbidity and mortality increased if the third stage was increased beyond 30 min. However, a recently published article by Frolova et al, puts this definition into a question. In this study, the researchers found that in a modern cohort, 90% of placentas are delivered within 10 minutes and the risk of postpartum hemorrhage almost doubles by the time the duration of third stage reaches twenty minutes.
Therefore, the traditional definition of prolonged third stage being >30 min, may be outdated and in need of revision.