Entrapment neuropathies are a group of disorders of the peripheral nerves that are characterized by pain and/or loss of function (motor and/or sensory) of the nerves as a result of chronic compression.

The brain and spinal cord receive and send information through muscles and sensory receptors, and the information sent to organs is transmitted through nerves. The nerves travel to the upper and lower extremities and traverse the various joints along their paths. Unfortunately, these nerves can become compressed or entrapped at various regions of the extremities, especially at “tunnel” regions, where they may be predisposed or vulnerable to compression.

Neurosurgeons, among other surgical specialists (eg, orthopedists and plastic surgeones), treat these entrapment neuropathies, which can account for 10-20% of the practice’s cases. The first operations or decompressions for different nerve entrapments were performed more than a century ago, but the disorders were described even earlier by such pioneering physicians as Sir Astley Cooper (1820s) and Sir James Paget (1850s).

Carpal tunnel syndrome (CTS), compression of the median nerve at the wrist, is the most common entrapment neuropathy. Cubital tunnel syndrome is the second most common and is caused by a compression at the elbow.
Other rare nerve entrapment syndromes include the suprascapular nerve, which accounts for approximately 0.4% of upper girdle pain symptoms, and meralgia paresthetica, which is a compression of the lateral femoral cutaneous nerve [LFCN] in the groin.

An ulnar nerve transposed at the elbow is shown in the image below. 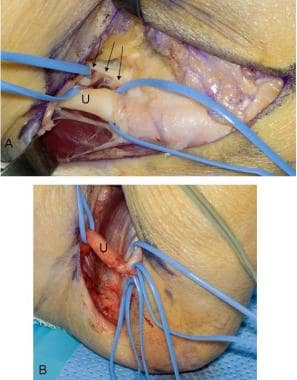 This article summarizes some basic principles of entrapment neuropathies, and, within each section, the specifics of the most common entrapment syndromes are outlined. Together, this information should provide the reader with a solid basis for further investigation.