Epidural hemorrhage indicates blood between the skull and outside of dura

Subdural hemorrhage denotes blood between the dura and the arachnoid mater

Intraventricular hemorrhage refers to blood within the ventricles

Intraparenchymal hemorrhage refers to blood within the brain itself

The true incidence of perinatal intracranial hemorrhage is not known. Clinical series do not identify the group of infants who do not present with clinical events, and autopsy series are biased toward infants with the worst outcomes. The larger autopsy-based studies report small subdural, subarachnoid, and intracerebral hemorrhages in 20-30% of live births. Larger intraventricular and posterior fossa hemorrhages were less common in these studies, representing 10-15% of live births. However, these studies represent older cohorts, and incidences have been declining.

More recent imaging-based studies show an inverse relationship between gestational age at birth and the incidence of intraventricular hemorrhage (IVH), ranging from 40-50% of neonates at less than 26 weeks’ gestation to fewer than 5% of neonates at more than 32 weeks’ gestation. A magnetic resonance imaging (MRI) study of full-term neonates found approximately a 25% incidence of asymptomatic intracranial hemorrhage after vaginal delivery.

Symptomatic intracranial hemorrhage in full-term neonates is much less common, in the range of 4 per 10,000 live births.
The incidence is higher, however, in instrumented births.

The following image is an example of a grade I germinal matrix hemorrhage. 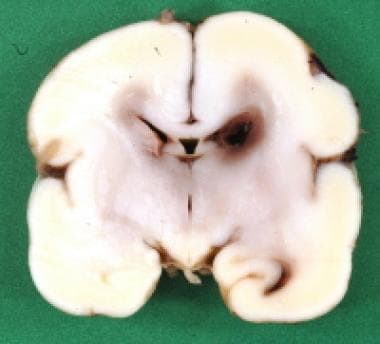