Subglottic stenosis (SGS) is a condition of the neonate’s or infant’s upper airway that is caused by either abnormally small development of the cricoid ring section (congenital) or through injury that is the direct or indirect result of trauma and inflammation (acquired). SGS dramatically increased in the mid-20th century following the development of neonatal ICUs (NICUs) and ventilator support of premature infants using endotracheal intubation for prolonged periods of support. Today, acquired SGS remains the most serious acquired airway abnormality in the pediatric population from prolonged intubation.

Premature infants who developed significant SGS in the past most often required tracheotomy tube placement, followed by a prolonged period of weaning from elevated oxygen levels as their pulmonary status improved. See the image below. 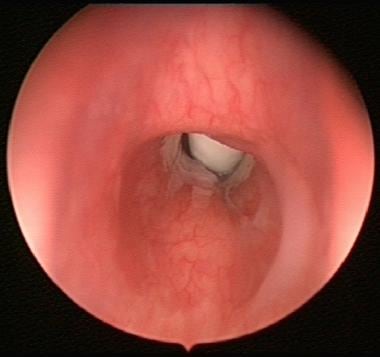 For many decades, SGS was not able to be corrected by a surgical procedure. Now, through laryngotracheal reconstruction, surgeons can enlarge the narrowed segment of the infant’s trachea and achieve successful removal of the tracheotomy tube. This surgical advancement was finally attained by the collective work of numerous surgeons who developed open surgical repair of the injured cricoid and tracheal rings. This procedure has been named laryngotracheal reconstruction (LTR) or laryngotracheoplasty.

LTR was developed in the 1960s and 1970s by numerous prominent surgeons working in Europe, Canada and the United States. Among the most prominent were Drs. Bertel Grahne, John Evans, George Buchanan Todd, Blaire Fearon, and Robin Cotton.
They designed LTR as an operation that increases the airway lumen by splitting the narrowed segment of cartilaginous rings and then suturing harvested cartilage grafts to increase the lumen’s diameter of the trachea. Successful LTR thereby creates a larger airway and improves and often alleviates the airway obstruction, allowing for the tracheotomy tube to be removed and the child to be decannulated.

Patients require LTR because of laryngeal or tracheal stenosis, complete atresia, or in rare cases severe tracheomalacia after tracheostomy. SGS, or severe narrowness of the airway, can be either congenital or acquired. Congenital stenosis occurs from failed recannulation of the airway during embryonic development. Acquired stenosis is the result of an inflammatory process or insult from the endotracheal tube.

Balloon dilation of the airway has been performed prior to open airway surgery. See the images below. 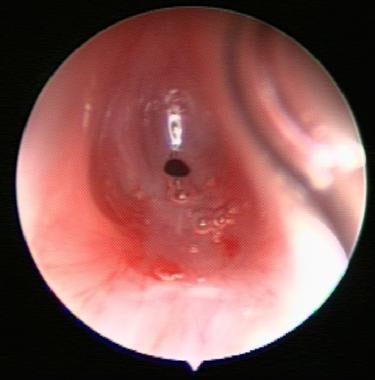 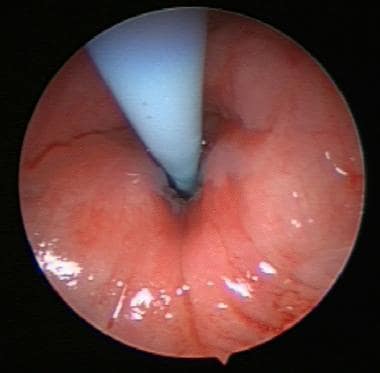 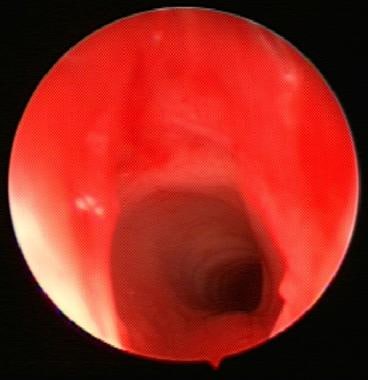 Congenital SGS is considered to be congenital in absence of acquired causes of stenosis or a history of endotracheal intubation. Congenital SGS has 2 main types: membranous and, more commonly, cartilaginous. The membranous type is a soft-tissue thickening of the subglottis caused by hyperplastic mucous glands with no inflammatory reaction or increased fibrous connective tissue. The cartilaginous types are more varied in etiology but most commonly involve a thickening or deformity of the cricoid cartilage such as an overly elliptical cricoid cartilage.

Acquired SGS is typically caused through injury that is the direct or indirect result of trauma and inflammation such as endotracheal intubation. The pathophysiology of acquired SGS secondary to prolonged endotracheal intubation is well described. Endotracheal tube intubation causes pressure necrosis and subsequent mucosal edema and ulceration at the point of contact with the tissue. As this edema and ulceration progresses, normal ciliary flow is interrupted, which leads to secondary infection and perichondritis. With further infection, cartilage necrosis occurs. This necrosis and ulceration heals by secondary intention and causes formation of granulation tissue and deposition of fibrous tissue in the submucosa, leading to narrowing of the endolarynx. Additionally, repeated intubations cause increased mechanical mucosal trauma and greater amounts of inflammatory response and scar tissue formation, leading to SGS.

The tracheal narrowing can involve several segments of the airway, may be secondary to complete tracheal rings, and can be either firm or soft, circumferential or longitudinal, smooth or irregular, mature or immature. The Cotton-Myer grading system is used to measure the severity of subglottic or tracheal stenosis and is determined with endotracheal tubes demonstrating a leak.
The grading system is as follows:

Table 1. Severity of subglottics stenosis as determined by endotracheal tube size with leak at 10-25 cm of water. (Open Table in a new window)

The pediatric larynx is approximately one third the size of that of an adult, with the most narrowed portion being that formed by the elliptical or signet shaped cricoid cartilage ring.

The subglottis, from the lower surface of the true vocal cords to the inferior surface of the cricoid, is the narrowest aspect of the pediatric airway. The tracheal narrowing can involve several segments of the airway, may be secondary to complete tracheal rings, and can be firm or soft, circumferential or longitudinal, smooth or irregular, mature or immature.

The subglottis is defined as the area extending from the lower surface of the true vocal cords to the lower surface of the cricoid ring. The pediatric larynx is approximately one third the size of that of an adult, with the most narrowed portion being that formed by the signet shaped cricoid cartilage ring. The infant larynx is positioned higher in the neck than the adult larynx; the cricoid is positioned approximately at the fourth cervical vertebrae. In comparison, the adult cricoid rests at about the level of the sixth cervical vertebrae.