This article will briefly review neurothekeoma from a pathology perspective.

Neurothekeoma is a benign, predominantly cutaneous neoplasm that was initially described by Harkin and Reed in 1969 by the name nerve sheath myxoma.
In 1980, Gallager and Helwig termed the lesion neurothekeoma (Greek: theke, sheath) to connote both the histologic nested appearance and the purported nerve sheath differentiation.
To date, there remains inconsistency in the literature regarding whether nerve sheath myxoma should be included in the morphologic spectrum of neurothekeoma.

Based on the amount of myxoid matrix, neurothekeoma is histologically divided into myxoid, intermediate, and cellular types. It is generally agreed that the myxoid variant of neurothekeoma is of neural origin. The cellular variant, however, is of questionable origin, as it lacks both consistent neural immunoreactivity and ultrastructural evidence of neural differentiation.

The image below depicts the histologic appearance of a myxoid neurothekeoma. 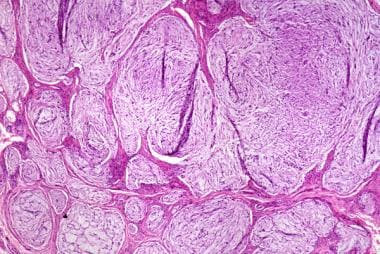 This myxoid neurothekeoma displays a lobulated, nonencapsulated but well-circumscribed proliferation of spindled and epithelioid cells embedded within a myxoid stroma.