Bullard laryngoscopy uses a rigid fiberoptic laryngoscope that was designed for use with patients who are difficult to intubate. In certain patients, it is not possible to visualize and access a target area, such as the glottis, without considerable effort and distortion of the internal anatomy of the patient. The Bullard laryngoscope (see the image below) resolves this problem with its simple and effective design. Bullard laryngoscopy allows visualization of the larynx without requiring alignment of the pharyngeal, laryngeal, and oral axes. 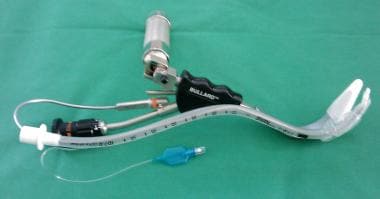 Laryngoscopy is a procedure whereby the airway and the passage into the airway (the glottis) is visualized or exposed to provide a route for the administration of anesthetic gases, introduce an endotracheal tube for securing the airway, allow a detailed examination of the larynx and its structures, or perform minor endolaryngeal procedures (eg, obtaining tissue specimens for biopsy).

In the resting human larynx, the epiglottis usually protects, and thus covers, the opening of the glottis. Therefore, it needs to be retracted out of the way when doing any of the other procedures. This retraction of the epiglottis is facilitated by laryngoscopy with the help of the blade of the laryngoscope.

The first generation of laryngoscopes have a straight (Miller) or a curved (Mackintosh) blade, which is adequate for performing routine laryngoscopy in a patient. However, certain characteristics of a patient or a clinical situation may render laryngoscopy cumbersome or even hazardous. These scenarios may give rise to what is known as difficult intubation. In these cases, standard endotracheal intubation using a Miller or a Mackintosh blade may prove challenging and even result in failure. Alternative methods are then used, which may include the use of a Bullard laryngoscope to bypass or overcome these difficulties.

The larynx is located within the anterior aspect of the neck, anterior to the inferior portion of the pharynx and superior to the trachea. Its primary function is to protect the lower airway by closing abruptly upon mechanical stimulation, thereby halting respiration and preventing the entry of foreign matter into the airway. Other functions of the larynx include the production of sound (phonation), coughing, the Valsalva maneuver, and control of ventilation, and acting as a sensory organ.

The larynx is composed of 3 large, unpaired cartilages (cricoid, thyroid, epiglottis); 3 pairs of smaller cartilages (arytenoids, corniculate, cuneiform); and a number of intrinsic muscles (see the image below). 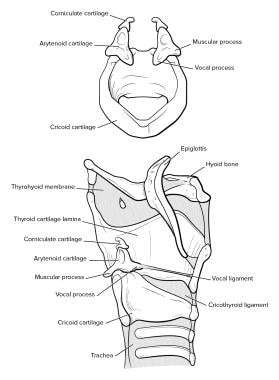 For more information about the relevant anatomy, see Larynx Anatomy and Throat Anatomy.

Indications for Bullard laryngoscopy include the following:

An obese or overweight patient with a thick, short neck

Inability to position the patient optimally for intubation, such as in disease and/or instability of the cervical spine (eg, kyphosis with barrel-chest deformity, spinal fractures)

With Bullard laryngoscopy, there is a low risk of failed intubation, less trauma to the lips and teeth, and less discomfort in the awake patient than other methods. The Bullard laryngoscope is sturdy and less likely to be damaged. It causes less cardiovascular instability than the Macintosh blade with conventional intubation technique.

In patients with severe maxillofacial injuries (eg, after a motor vehicle collision), awake intubation with conventional direct laryngoscopy may be unsuccessful because of distorted airway anatomy, a cervical collar, presence of excessive blood in the oropharynx, and lack of patient cooperation. Flexible fiberoptic laryngoscopy may not even be attempted because blood and secretions may be too numerous to allow adequate visualization.

The use of the Bullard laryngoscope, in conjunction with forceful oxygen flow through its insufflation port, may allow the practitioner to effectively clear blood and secretions in patients with maxillofacial injuries. The oxygen insufflation port of the Bullard blade is much larger in diameter than that of a conventional fiberoptic bronchoscope. This allows for more forceful delivery of oxygen through the instrument. In addition, the Bullard laryngoscope is particularly effective in trauma situations because the patient’s head may be maintained in a neutral position (eg, without removing the cervical collar, if present).

The Bullard laryngoscope may be an ideal instrument for intubation of the trachea in a patient with acute epiglottitis. Traditional laryngoscopes involve pressure on an already swollen and compromised epiglottis. Fiberoptic laryngoscopes are easily deflected by the donut shape of the epiglottis. Considerable trauma can occur while blindly trying to slide the tube over the scope itself.
The Bullard laryngoscope barely touches the epiglottis on insertion and provides a clear view of the vocal cords and larynx. Also, the endotracheal tube can be viewed as the tube is placed into the trachea.

In a study of cadaver models, both with restricted and unrestricted mobility of the cervical spine, the Bullard laryngoscope was found to produce less cervical spine movement and a better view, with intubating time similar to the GlideScope, Viewmax, and Macintosh laryngoscopes.

No absolute contraindications exist for the use of Bullard laryngoscope. However, there is a considerable learning curve and inexperienced persons are not encouraged to use this laryngoscope in difficult situations. For example, it has been found that the video-optical intubation stylet is especially useful when a difficult tracheal intubation is anticipated or encountered, as it is simpler to execute and more effective.

Constant positioning and repositioning while changing the tip extender blade may increase the costs and risks of the surgical procedure being undertaken.

If a tracheal tube larger than 7.5 mm is used, the introducing stylet may be pushed posteriorly and thus obscure the view.

Sometimes, the orotracheal tube may hit against the right arytenoid cartilage and a large epiglottis, leading to problems.

If laser is to be used, the metallic laser tube cannot be fitted over the introducing stylet. In these cases, a standard tube has to positioned first and then the metal laser tube should be introduced using a tube exchanger.

Before use, the tip of the laryngoscope blade housing the image bundle at the end of the sheath should be cleaned thoroughly.