Burns of skin or other tissue are caused by fire, radiant heat, radiation, chemical, or electrical contact. Thermal burns result from any external heat source (flame, hot liquids, heated solid objects, or hot gases). Fire-related deaths may also result from inhalation of carbon monoxide and other toxic products of combustion, including cyanide.

Additionally, there are many nonthermal types of burns, which will be discussed briefly. Radiation burns result from prolonged exposure to solar ultraviolet radiation or other sources and are very rare in the forensic arena, as these individuals survive unless there are other factors contributing to the fatal outcome.

Chemical burns result from exposure to strong acids, strong alkalis, phenols, cresols, mustard gas or phosphorus, with deaths from acid and alkali burns being most common. These agents can be ingested or come into contact with the external surface of the body and with resultant geographic burns.

Electrical burns result in injury to the skin at points of contact to the electrical source; on occasion, the cutaneous burn is very inconspicuous and can be missed entirely. The mechanism of death is cardiac, resulting in ventricular fibrillation with, at times, little or no tissue destruction at the contact point.

Similar to electrocution, death from lightning results in cardiac arrhythmia and asystole, with a paucity of cutaneous findings. Occasionally, a Lichtenberg figure, also known as ferning or keraunopathy, may be seen. This is observed as an arborizing or ferning pattern on the skin. This phenomenon is transient and poorly understood but may be related to intravascular hemolysis.

The following is an example of a postmortem artifact on a body following burning. 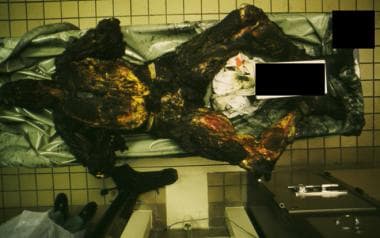 Pugilistic attitude as a result of heat-related contractures.

Fire deaths are some of the most challenging fatalities, both from the investigative and the autopsy aspect. One reason is the multifactorial investigative team approach to a fire death and the inevitable contamination of the scene. The first wave of investigators is the fire department personnel armed with powerful hoses, followed by the police, and then the medical examiner and his/her investigator staff. In between, one has to deal with the news media and the curious immediate public.

Oftentimes, the fire is still smoldering as the flames are being extinguished. The debris can be massive, and all semblance to a dwelling place is destroyed. Investigators may pass the charred body(ies) a few times before the decedent(s) is(are) located at the scene. Once safety to enter the dwelling is established, only then can the arduous task of putting the pieces of the puzzle together begin.