In mammals, the anatomy of the inner ear consists of the bony labyrinth, a system of passages making up the following 2 main functional parts: (1) the cochlea, which is dedicated to hearing, and (2) the vestibular system, which is dedicated to balance.
The inner ear is found in all vertebrates, with substantial variations in form and function. The inner ear is innervated by the eighth cranial nerve in all vertebrates. (See the image below.) 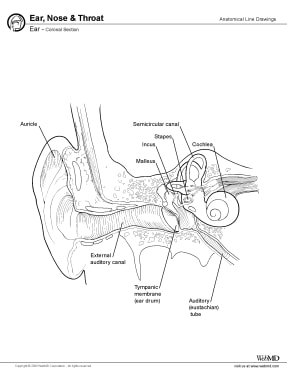 The walls of the bony labyrinth consist of dense bone everywhere except at 2 small areas near the base of the cochlear spiral. The round window consists of a thin, membranous partition that separates the perilymph of the cochlear chambers from the air-filled middle ear. Collagen fibers connect the boney margins of the opening known as the oval window at the base of the stapes.

A liquid called perilymph, the properties of which closely resemble those of cerebrospinal fluid, flows between the bony and membranous labyrinths. Another fluid, called endolymph, is contained in the membranous labyrinth. The endolymph has concentrations of electrolytes that differ from those of typical body fluids.

The bony labyrinth can be subdivided into the vestibule, 3 semicircular canals, and the cochlea. The vestibule contains a pair of membranous sacs: the saccule (sacculus) and the utricle (utriculus). Receptors in the vestibule provide for sensations of gravity and linear acceleration.

The cochlea is a bony, spiral-shaped chamber that contains the cochlear duct of the membranous labyrinth. The sense of hearing is provided by receptors within the cochlear duct. A pair of perilymph-filled chambers is found on each side of the duct. The entire apparatus makes turns around a central bony hub, much like a snail shell.