Reactive gastropathy refers to the constellation of endoscopic and histologic findings caused by chemical injury to the gastric mucosa.
The histologic picture is characterized by foveolar hyperplasia with edema, smooth muscle hyperplasia, and congestion of superficial capillaries in the lamina propria in the absence of significant inflammation (see an example in the image below). 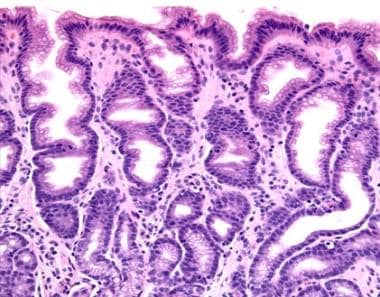 These features were originally described in biopsy specimens obtained from patients who had undergone gastric surgery and were felt to be specific for bile reflux.
It has since become apparent, however, that the constellation of histologic features seen in reactive gastropathy is a nonspecific response to chemical injury of the gastric mucosa.

Go to Peptic Ulcer Disease for complete information on this topic.