The inner layer, called the endometrium, is the most active layer and responds to cyclic ovarian hormone changes; the endometrium is highly specialized and is essential to menstrual and reproductive function

The middle layer, or myometrium, makes up most of the uterine volume and is the muscular layer, composed primarily of smooth muscle cells

The outer layer of the uterus, the serosa or perimetrium, is a thin layer of tissue made of epithelial cells that envelop the uterus 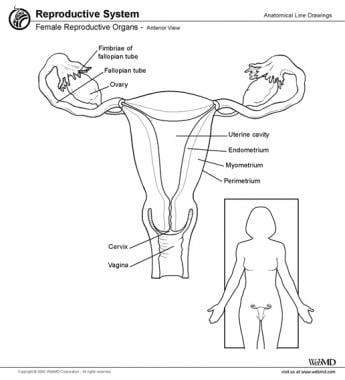 The uterus is a dynamic female reproductive organ that is responsible for several reproductive functions, including menses, implantation, gestation, labor, and delivery. It is responsive to the hormonal milieu within the body, which allows adaptation to the different stages of a woman’s reproductive life. The uterus adjusts to reflect changes in ovarian steroid production during the menstrual cycle and displays rapid growth and specialized contractile activity during pregnancy and childbirth. It can also remain in a relatively quiescent state during the prepubertal and postmenopausal years.

The embryonic origin and development of the uterus is relatively complex. Until approximately 8 weeks’ gestation, primordia for both male and female internal genitalia—the mesonephric (Wolffian) and paramesonephric (Mullerian) ducts, respectively—coexist in the embryo. The sexual differentiation process involves multiple steps in which hormonal signals, growth factors, and specific genetic influences are required.

In the female embryo, due to the absence of a Y chromosome and lack of exposure to testosterone from functional testicular tissue, the normal developmental sequence of events results in fusion and canalization of the paramesonephric (Mullerian) ducts in the midline pelvis to form the female pelvic organs. Meanwhile, regression of the mesonephric (Wolffian) ducts occurs. Abnormalities in this process may occur during embryogenesis, which can result in the range of known paramesonephric anomalies.