Four parathyroid glands are found near the posterior aspect of the thyroid gland. They are small (20-40 mg) and have a beanlike shape.

These 4 glands produce parathyroid hormone (PTH), which helps to maintain calcium homeostasis by acting on the renal tubule as well as calcium stores in the skeletal system and by acting indirectly on the gastrointestinal tract through the activation of vitamin D.

The parathyroid glands have a distinct, encapsulated, smooth surface that differs from the thyroid gland, which is has a more lobular surface, and lymph nodes, which are more pitted in appearance. The color of the parathyroid glands is typically light brown to tan, which relates to their fat content, vascularity, and percentage of oxyphil cells within the glands.
The yellow color may be confused with surrounding fat. A distinct hilar vessel is also present that can be seen if the surrounding fat does not obscure the glands’ hila. 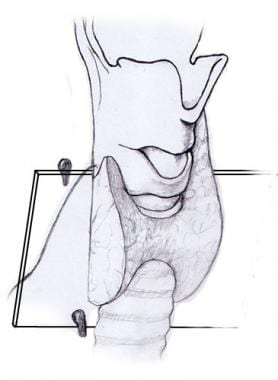 The superior parathyroid glands are derived from the fourth pharyngeal pouch and migrate together with the ultimobranchial bodies. The ultimobranchial bodies also develop from the fourth pharyngeal pouch, and, during the fifth week of development, these cells detach from the pharyngeal wall and fuse with the posterior aspect of the main body of the thyroid as it descends into the neck. These cells differentiate into the parafollicular cells (C cells) that secrete calcitonin.
The superior parathyroid glands migrate a shorter distance than the inferior glands, which results in a relatively more constant location in the neck.

Because the superior parathyroid glands travel with the ultimobranchial bodies, they remain in contact with the posterior part of the middle third of the thyroid lobes.

See also Embryology of the Thyroid and Parathyroids.