The cecum, which is the proximal blind end (pouch) of the ascending (right) colon, is a blind cul-de-sac below the level of the ileocecal junction that lies in the right iliac fossa. The terminal ileum opens into the cecum at its medial wall, and the opening is guarded by an ileocecal valve.

The appendix (an appendage of the cecum), also called vermiform process or vermiform appendix, is a tubular structure with a blind end attached to the cecum. The base of the appendix lies on the posteromedial wall of the cecum 1-2 cm below the ileocecal junction. The tip of the appendix, however, floats in the peritoneal cavity and may be pelvic, preileal, postileal, or even retrocecal in position.

The cecum (the widest part of large intestine) leads to the ascending (right) colon, which ascends vertically from right iliac fossa through the right lumbar region into right hypochondrium under the liver. It then takes a right turn and continues as the horizontally placed transverse colon, which reaches across the epigastrium to the left hypochondrium under the spleen. It then takes a right turn again and descends vertically through the left lumbar region to the left iliac fossa as the descending (left) colon. The descending colon is followed by the inverted V-shaped sigmoid colon (the narrowest part of colon), which becomes the rectum at S3 level. The cecum and colon have 3 longitudinal muscular bands called tenia and multiple sacculations called haustra. 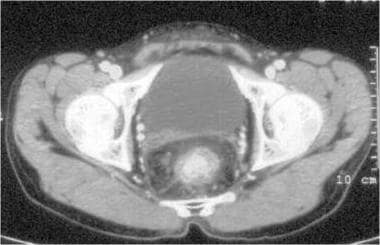 Rectum with urinary bladder in front in a male patient

The greater omentum (gastrocolic ligament) is like an apron with 4 layers of peritoneum (often fused). Two layers go down from stomach and then run upward to be attached to the transverse colon.

There are several peritoneal fossae (eg, superior and inferior ileocecal, subcecal, retrocecal) around the cecum, which can be sites of internal herniation of the small bowel. Transverse mesocolon, containing the middle colic vessels, is attached to the anterior surface of the pancreas. Sigmoid mesocolon, containing superior rectal vessels, has an inverted-V – shaped attachment to the posterior abdominal wall — the tip of the V lying on the pelvic brim over the left ureter. The rectum does not have a proper mesentery, but the soft tissue around the rectum is often referred to as “mesorectum” by surgeons.

The large intestine, especially the colon, is covered with numerous omental appendages (appendices epiploicae)—appendages of fat, each containing a vessel of its own from the colonic wall. These are visible during surgery.