The immune system is an inherent self-defense system consisting of cells that helps the body distinguish between self and non-self molecules. Different pathways regulate different immune cells to help the body differentiate the bodies own healthy cells from disease-causing agents including bacteria, viruses, fungi, parasites, cancerous cells, and many more.

All the components of the immune system have to continuously modify to keep the bodies defense up against the ever-evolving organisms that constantly are on a quest to find a new way to attack the host. This continuously evolving system sometimes reacts against the bodies own cells, identifying it as foreign, which leads to healthy tissue destruction and causes autoimmune diseases and cancers. Also, weakened defenses of the body by the immune system due to genetic, acquired causes precipitate an inherent state of anergy (unresponsiveness) that can lead to immunodeficiency diseases.

The immune system consists of multiple levels of defense against invading pathogens. It consists of physical barriers, mechanisms of innate immunity as well as adaptive immunity. The physical barrier can be mechanical, chemical, or biological and located at different sites in the body including skin, secretions within the respiratory tract, and in the gastrointestinal or genitourinary tract as flora. The cells that have the inherent property of innate and adaptive immunity within the body are present at different sites including the blood, lymphatic system (lymph, lymphoid nodules and lymphoid organs), epithelium, and connective tissues.

An image depicting immunoglobulin can be seen below. 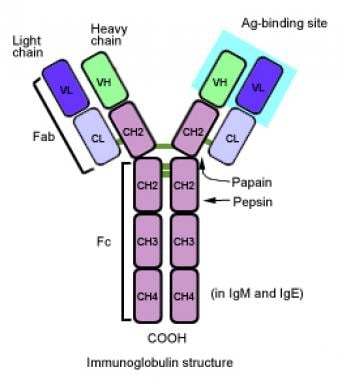