The endocrine system—the other communication system in the body—is made up of endocrine glands that produce hormones, chemical substances released into the bloodstream to guide processes such as metabolism, growth, and sexual development. Hormones are also involved in regulating emotional life.

Near the thyroid are 4 tiny pea-shaped organs, the parathyroids, which secrete parathormone to control and balance the levels of calcium and phosphate in the blood and tissue fluids. This, in turn, affects the excitability of the nervous system.

The pineal gland is a pea-sized gland that apparently responds to exposure to light and regulates activity levels over the course of the day.

The pancreas lies in the curve of the duodenum and controls the level of sugar in the blood by secreting insulin and glucagon.

The pituitary gland produces the largest number of different hormones and, therefore, has the widest range of effects on the body’s functions. The posterior pituitary is controlled by the nervous system. It produces 2 hormones: vasopressin, which causes blood pressure to rise and regulates the amount of water in the body’s cells, and oxytocin, which causes the uterus to contract during childbirth and lactation to begin. The anterior pituitary, often called the “master gland,” responds to chemical messages from the bloodstream to produce numerous hormones that trigger the action of other endocrine glands.

These reproductive glands—the testes in males and the ovaries in females, and, to a lesser extent, the suprarenal (adrenal) glands —secrete androgens (including testosterone) and estrogens.

The 2 suprarenal glands are located above the kidneys. Each has 2 parts: an outer covering, the adrenal cortex, and an inner core, the adrenal medulla. Both influence the body’s responses to stress. For example, in response to a stressful situation, the pituitary gland may release beta endorphin and ACTH, which, in turn, prompt the suprarenal cortex to release hormones. Meanwhile, the autonomic nervous system stimulates the suprarenal medulla to secrete hormones such as epinephrine into the bloodstream. 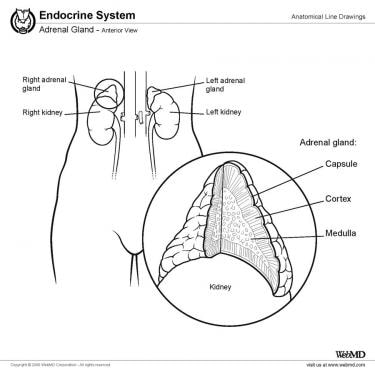