An image depicting the peripheral nervous system can be seen below. 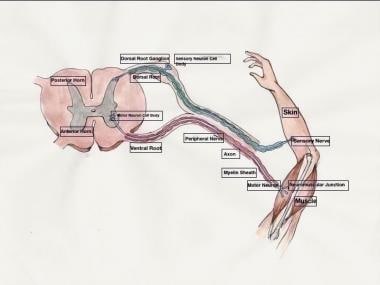 Nerve cells are called neurones. A neurone consists of a cell body (with a nucleus and cytoplasm), dendrites that carry electrical impulses to the cell, and a long axon that carries the impulses away from the cell. The axon of one neurone and the dendrites of the next neurone do not actually touch. The gap between neurones is called the synapse.

Neuronal function is complex and involves numerous processes in nerve transmission. Generation of a nerve impulse (action potential) of a sensory neurone occurs as a result of a stimulus such as light, a particular chemical, or stretching of a cell membrane by sound. Conduction of an impulse along a neurone occurs from the dendrites to the cell body to the axon. Transmission of a signal to another neuron across a synapse occurs via chemical transmitter. This substance causes the next neurone to be electrically stimulated and keeps the signal going along a nerve.

Ganglia may be divided into sensory ganglia of spinal nerves (spinal or posterior root ganglia) and cranial nerves and autonomic ganglia. Sensory ganglia of spinal nerves are fusiform swellings situated on the posterior root of each spinal nerve just proximal to the root’s junction with a corresponding anterior root. They are referred to as spinal or posterior root ganglia. Similar ganglia that are also found along the course of cranial nerves V, VII, VIII, IX, and X are called sensory ganglia of these nerve. Autonomic ganglia, which are often irregular in shape, are situated along the course of efferent nerve fibers of the autonomic nervous system. They are found in the paravertebral sympathetic chains, around the roots of the great visceral arteries in the abdomen, and close to, or embedded within, the walls of various viscera.