An image depicting the central nervous system can be seen below. 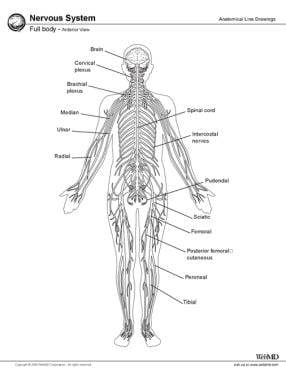 In the central nervous system, the brain and spinal cord are the main centers where correlation and integration of nervous information occur. Both the brain and spinal cord are covered with a system of membranes, called meninges, and are suspended in the cerebrospinal fluid; they are further protected by the bones of the skull and the vertebral column.

The central nervous system is composed of large numbers of excitable nerve cells and their processes, called neurons, which are supported by specialized tissue called neuroglia. The long processes of a nerve cell are called axons or nerve fibers. The interior of the central nervous system is organized into gray and white matter. Gray matter consists of nerve cells embedded in neuroglia; it has a gray color. White matter consists of nerve fibers embedded in neuroglia; it has a white color due to the presence of lipid material in the myelin sheaths of many of the nerve fibers. The billions of neurons in the brain are connected to neurons throughout the body by trillions of synapses.