The normal human heart contains 4 valves that regulate blood flow into and out of the heart. The aortic and pulmonic valves are known as the semilunar valves, whereas the tricuspid and mitral valves are referred to as the atrioventricular valves. All the valves are trileaflet, with the exception of the mitral valve, which has 2 leaflets. Cardiac valves are surrounded by fibrous tissue forming partial or complete valvular rings, or annuli. These annuli join the fibrous skeleton of the heart to anchor and support the valvular structures.

In most cases, the orifices of the coronary arteries arise within the 2 anterior sinuses of Valsalva, usually positioned just below the sinotubular junction.
However, arteries can occasionally be positioned superior relative to the sinotubular junction. As a result of the semilunar attachment of the aortic valvar leaflets, 3 triangular extensions of the left ventricular outflow tract reach the level of the sinotubular junction.
These triangles are formed of thinned fibrous walls of the aorta between the expanded sinuses of Valsalva. Their most apical regions represent areas of potential communication with the pericardial space and, in the case of the triangle between the right and left coronary aortic leaflets, with the plane of tissue interposed between the aorta and anteriorly located sleeve-like subpulmonary infundibulum. The 2 interleaflet triangles bordering the noncoronary leaflet are also in fibrous continuity with the fibrous trigones, the mitral valve, and the membranous septum.

The dextrosuperior and sinistroinferior cushions fuse and, in doing so, form the truncal septum. The truncal septum undergoes a complex process of differentiation, eventually forming the right and left aortic valve cusps and 2 leaflets of the pulmonic valve. Of the 2 intercalated endocardial cushions, the right cushion eventually forms the posterior aortic valve cusp, whereas the left forms the anterior pulmonic valve leaflet. This occurs during the counterclockwise rotation and caudal shift of the conotruncus. During this time, the endocardial cushions also undergo dedifferentiation from a myosin-heavy chain to an alpha-smooth muscle actin phenotype, resulting in mature arterial valvular leaflets. The improper fusion or the incomplete dedifferentiation of the previously mentioned endocardial cushions is thought to be responsible for the formation of anatomically and structurally congenitally abnormal aortic valves.

The following image is an overview of the transitions occurring in early heart development in amniotes (see the image below). 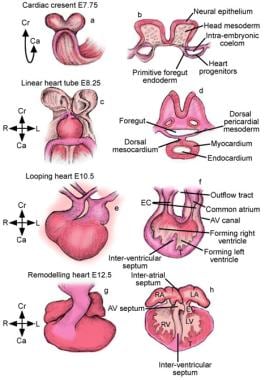 This box provides an overview of the transitions occurring in early heart development in amniotes (on the basis of the events in mouse development). The whole embryo or isolated heart is shown on the left (L). On the right (R), a representative section (transverse in panels b and d; longitudinal in panels f and h) illustrates the main internal features. As noted, staging in days of embryonic development (E) is based on mouse development. The myocardium and its progenitors are indicated in red. The cardiac progenitors are first recognizable as a crescent-shaped epithelium (the cardiac crescent) at the cranial and craniolateral parts of the embryo (panels a and b). The progenitor population extends cranially and laterally almost to the junction between the embryonic and extraembryonic regions of the embryo (red arrow in panel b). Next, heart progenitors move ventrally to form the linear heart tube (panels c and d). The linear heart tube undergoes a complex progression termed cardiac looping, in which the tubular heart adopts a spiral shape with its outer surface sweeping rightwards (panels e and f). During looping, the inflow portion of the heart, including the common atrium, is forced dorsally and cranially, so that it is now above the developing ventricles. The internal relief of the heart at this stage has become complex (panel f). Endocardial cushions (EC), the precursors of the tricuspid and mitral valves (box 1), are forming in the atrioventricular (AV) canal. Endocardial cushions also form in the outflow tract, and these are the precursors of the aorticopulmonary septum, which divides the outflow tract into the aorta and pulmonary artery. These cushions also give rise to the aortic and pulmonary valves. During the remodelling phase of heart development (panels g and h), division of the heart chambers by septation is completed, and distinct left (LV) and right ventricles (RV) and left (LA) and right atria (RA) are evident. Ca = caudal (inferior); Cr = cranial (superior).

The triangle between the right and noncoronary sinus is in close proximity to the bundle of His as it courses through the central fibrous body just below the inferior margin of the membranous ventricular septum, which can be of clinical significance in patients with endocarditis.