Intra-aortic balloon counterpulsation is a method of temporary mechanical circulatory support that attempts to create more favorable balance of myocardial oxygen supply and demand by using the concepts of systolic unloading and diastolic augmentation. As a consequence, cardiac output, ejection fraction, and coronary perfusion are increased, with a concomitant decrease in left ventricular (LV) wall stress, systemic resistance to LV ejection, and pulmonary capillary wedge pressure. The following review discusses the hemodynamic, clinical, and technical aspects of this important modality for hemodynamic support.

History of the procedure

The principle of aortic counterpulsation was originally described by Dr. Adrian Kantrowitz in 1959 using a dog model in which the hemidiaphragm was wrapped around the thoracic aorta, which, by electrical stimulation of the phrenic nerve, was made to contract during diastole. Altering the pressure characteristics of the cardiac cycle by augmenting diastolic pressure was postulated to improve coronary perfusion and take over as much as 25% of the pumping burden of the natural heart.

The modern intra-aortic counterpulsation device, which consists of a balloon mounted on a flexible catheter, was described by Moulopoulos et al at the Cleveland Clinic in 1962.
The original description was of a latex tube tied around a polyethylene catheter with side holes. Carbon dioxide was used to inflate the balloon regulated via a 3-way solenoid valve.
Balloon inflation occurred for a predetermined duration and was timed using the R wave on the electrocardiogram.

In 1971, Krakauer et al working with Adrian Kantrowitz described their experience in 30 patients who received intra-aortic balloon pump (IABP) support for cardiogenic shock secondary to myocardial infarction refractory to pharmacologic therapy. In this series, most patients (25 of 30) achieved hemodynamic stabilization and reversal of shock after the introduction of counterpulsation. In the subgroup of patients developing medically refractory shock within the first 12 hours of infarction, 9 of the 20 survived to hospital discharge.

According to an analysis by Goldberg regarding trends in the care for cardiogenic shock complicating acute myocardial infarction, overall use of IABP during the 10-year period from 1986-1997 was only 20%. However, a temporal trend toward increased use of IABP in this patient population was such that by 1997, 42% of patients received IABP support for cardiogenic shock that developed as a consequence of an acute myocardial infarction.

The IABP improves many of the hemodynamic perturbations of circulatory failure and cardiogenic shock.
Therefore, understanding the pathophysiology of this dramatic manifestation of heart failure is important. Cardiogenic shock is characterized by end-organ tissue hypoperfusion, which initiates a series of counter-regulatory mechanisms. The classic understanding of the interplay between the underlying pathophysiology and counter-regulatory mechanisms is that of a downward spiral in which compensatory mechanisms such as peripheral vasoconstriction, tachycardia, and neurohormonal regulatory activation contribute to further worsening of left ventricular failure (see image below). 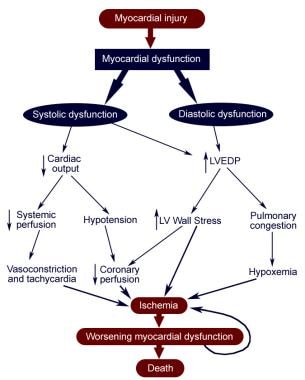 While a comprehensive discussion of the hemodynamics of cardiogenic shock is beyond the scope of this review, it is worthwhile to note the following:

Catecholamine vasopressors to treat hypotension in the setting of cardiogenic shock should be used judiciously to maintain coronary perfusion pressure but also minimize additional myocardial oxygen demand through increasing afterload and genesis of dysrhythmias.

Reperfusion of ischemic myocardium has been shown to provide long-term survival benefit in the setting of cardiogenic shock related to acute myocardial infarction.

The above highlights of cardiogenic shock pathophysiology set the stage for the following discussion of counterpulsation hemodynamics.

Effects of counterpulsation on systemic hemodynamics

The intra-aortic balloon, by inflating during diastole, displaces blood volume from the thoracic aorta. In systole, as the balloon rapidly deflates, this creates a dead space, effectively reducing afterload for myocardial ejection and improving forward flow from the left ventricle. The net effect is to decrease systolic aortic pressure by as much as 20% and increase diastolic pressure.
In a multicenter trial of counterpulsation in cardiogenic shock, a mean 30 mm Hg increase in diastolic pressure was observed with no significant change in heart rate. 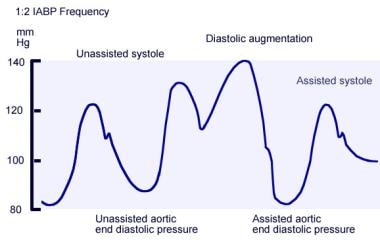 The net effect on myocardial mechanics is to decrease myocardial oxygen consumption, increase cardiac output, and lower peak left ventricular wall stress.
The magnitude of counterpulsation hemodynamic effect depends on several factors, including the relation of balloon volume to aorta size, heart rate and rhythm, and aortic compliance.
In addition, diastolic augmentation is most efficient the closer the balloon is to the aortic valve.
To minimize the risk of cerebral embolism, the ideal IABP position in modern practice is 1 or 2 centimeters distal to the origin of the left subclavian artery.

Effect of counterpulsation on coronary perfusion

Kern studied coronary flow in 15 patients with a mean vessel narrowing of 95%. No significant increase in coronary flow augmentation was demonstrated in the post-stenotic segment, but angioplasty restored the effect of counterpulsation to augment coronary flow.
Because of the severity of luminal obstruction present in the population studied, the use of a guidewire beyond the stenosis may have adversely affected flow measurements. In addition, conclusions cannot be drawn regarding flow augmentation beyond less severe stenoses, since these were not studied.

Takeuchi addressed this issue by comparing 40 patients undergoing counterpulsation for typical indications using transthoracic Doppler echocardiography to measure coronary flow velocity. Analysis of the data stratified by lesion severity showed enhanced distal vessel flow regardless of the degree of stenosis present.
Nonetheless, a major contributor to the relief of ischemia by counterpulsation is via its effect to decrease afterload, left ventricular wall stress, and myocardial oxygen demand.

The IABP is commonly introduced via the common femoral artery using a Seldinger technique. If placed in a cardiac catheterization laboratory, fluoroscopy is often used to confirm correct position of the device, but a chest radiograph can be used to confirm position after placement if fluoroscopy is not available. The tip of the balloon should be positioned 1-2 centimeters distal to the origin of the left subclavian artery. In the case of blind placement, the take-off of the left subclavian artery can be identified using the second rib as a landmark. The caudal end of the balloon should be positioned above the origin of the renal arteries. In most patients, the right and left renal arteries arise between the first and second lumbar vertebral bodies.

The first image below shows a chest radiograph from a patient with an IABP in place with the major landmarks vital for proper positioning highlighted. The second image shows intra-arterial positioning of an IABP. 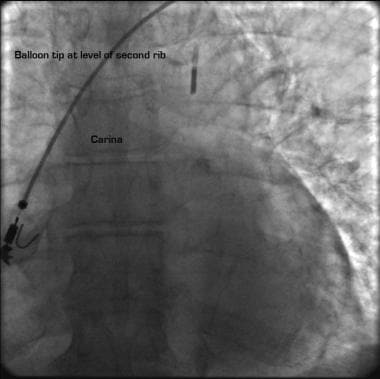 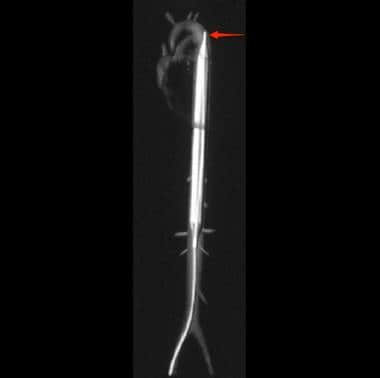