Percutaneous closure is a surgical procedure used to treat patients with patent foramen ovale (PFO) and atrial septal defect (ASD). Advancements in device technology and image guidance now permit the safe and effective catheter-based closure of numerous intracardiac defects, including PFO and ASD.
With these catheter-based closure procedures becoming more prevalent in adults, it is imperative that clinicians possess a sound understanding of intracardiac shunt lesions and indications for repair or closure.

The anatomy of PFO and ASD are shown in the images below. 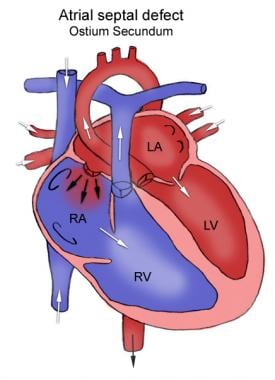 Anatomy of atrial septal defect. This figure shows the defect in the atrial septum, allowing for connecting between the left and right atria. 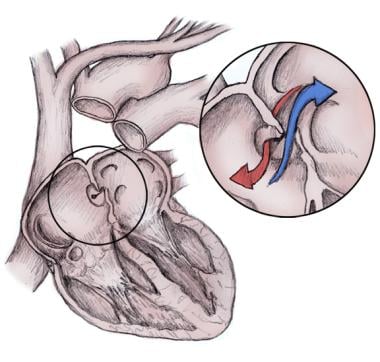 Studies on annual recurrences after a cerebral vascular accident or a transient ischemic attack reported an incidence ranging from 3% to 16%.
In a large study, the recurrent stroke rate or mortality from an embolic event was 6% to 8% per year.
A pooled analysis suggests that the presence of a PFO alone increased the risk for recurrent events 5-fold, with an even higher risk in the presence of an atrial septal aneurysm.

Homma et al
identified other risk factors for recurrent stroke, including the presence of a Eustachian valve directed toward the PFO, the gaping diameter of the PFO, and the number of microbubbles present in the left atrium during the first seconds after release of a Valsalva maneuver during a bubble test.

The effectiveness of percutaneous closure compared with surgical closure or medical management in preventing recurrent embolic events is currently unknown. Uncontrolled studies evaluating percutaneous device closure of a PFO or, much less often, an ASD in patients with at least one paradoxical embolic event (ie, transient ischemic attack, stroke, or a peripheral embolism) have reported results similar to those reported for surgical closure.
A clinical trial is currently ongoing to determine whether percutaneous closure is more effective than medical management in preventing recurrent embolic events.

Nagpal et al studied 414 patients who underwent percutaneous closure between 2002-2009. They concluded that the long-term rate of recurrent stroke is low and serious long-term complications are rare, particularly in patients with a single neurological event.

Some studies have suggested that PFO closure may reduce the frequency and severity of migraine headaches in patients with significant right-to-left shunts. This data comes from single-center observational studies.
In a meta-analysis of 11 studies, Butera et al evaluated a total of 1,306 patients who underwent PFO closure, of whom 40% suffered from migraine. Quantitative synthesis showed complete cure of migraine in 46%, with resolution or significant improvement of migraine in 83% of cases. They concluded that a significant group of subjects with migraine headaches, particularly if treated after a neurological event, may benefit from percutaneous closure of their patent foramen ovale. However, no randomized, controlled studies are currently available to support this.