Chemical peeling, also termed chemexfoliation, represents accelerated exfoliation or skin damage induced by caustic agents that cause controlled damage, followed by the release of cytokines and inflammatory mediators, resulting in thickening of the epidermis, deposition of collagen, reorganization of structural elements, and increases in dermal volume. This process decreases solar elastosis and replaces and reorients the new dermal connective tissue. The result is an improved clinical appearance of the skin, with fewer rhytides and decreased pigmentary dyschromia, and a more youthful appearance.

The images below depict a patient during and after a salicylic acid peel. 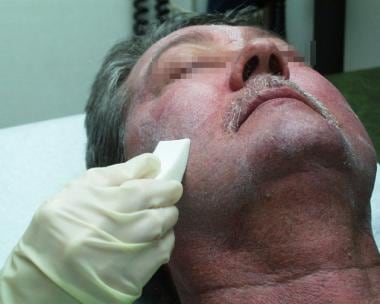 Men also request chemical peeling. This 56-year-old man is in the process of a salicylic acid peel. 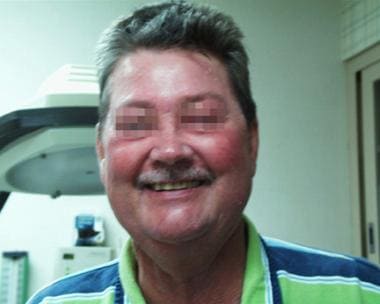 Same patient as shown above following a successful chemical peeling.

In recent years, a large shift has occurred in the manner and depth to which peels are performed. Lasers largely have supplanted deep chemical peeling because of the control of depth they afford, their lesser effect on pigmentation, and their ease of use, with no chemical adverse effects. Superficial peels, in contrast, have increased in popularity. Various agents are used; for simple exfoliation, glycolic or lactic acids are now commonly found in almost all moisturizers and in many makeup bases.

Aging skin undergoes a number of changes. With time, it thins, falls, and creases along muscular and gravitational folds. Compared with the effects of simple aging on skin, sun damage leads to additional and different problems, including thickening, solar elastosis, and resultant pigmentary irregularities. Carcinogenic effects lead to actinic keratoses, basal and squamous cell cancers, and, less directly, to melanomas.

A discussion of mechanical peeling is warranted for thoroughness. Lasers largely are used for skin ablation, with the carbon dioxide ultrapulsed laser currently used most often. The Er:YAG laser is used more for superficial resurfacing when little tightening and superficial depth of peel are required.
Fractional laser resurfacing devices have shown encouraging results, especially for acne scarring.
Many surgeons still use dermabrasion. The lack of control and lack of ability to resurface evenly have resulted in the supplantation of this technique by those already discussed. Microdermabrasion is currently a popular technique because no downtime or discomfort is associated with the procedure. Medical devices tend to have stronger suction, and more abrasive crystals are used, while spa and lay devices tend to be gentler, with less overall effect but increased safety. In general, mechanical abrasion tends to improve scarring more than chemical peeling agents, given similar depth of penetration.

Currently, a number of categories of chemical peeling agents available for rejuvenating the skin can be found. These range from superficial formulations available over the counter to deep chemical agents that should only be applied by a physician in a controlled setting. When used in the proper setting with appropriate technique, nearly all of these products have proven successful in improving quality and appearance of facial skin.

The goal of chemical peeling is to remove a predictable uniform thickness of damaged skin. Normal wound healing and skin rejuvenation follow, while complications such as scarring and pigmentary changes are minimized.