The subependymal giant cell astrocytoma is a slow-growing neoplasm arising from a hamartoma of periventricular cells with neuronal and glial lineage differentiation, but its inclusion derives from its historical taxonomic relationship to astrocytomas. The pilomyxoid astrocytoma is an entity with not only pilocytic features, but also intercellular mucin and aggressive growth tendencies that distinguishes it from the more indolent pilocytic astrocytoma.

Tumors of a controversial nature and, therefore, not discussed in this article include the astroblastoma that is now best considered to be of uncertain histologic origin with ultrastructural features of tanycytes. Although the polar spongioblastoma has historically been considered to be of primitive glial origin, the evidence of the polar spongioblastoma’s very existence is questionable and is thought to be more akin to a growth pattern than a specific histologic type that may occur in either gliomas or tumors of neuronal origin.

The image below is an example of the histologic appearance of a pilocytic astrocytoma. 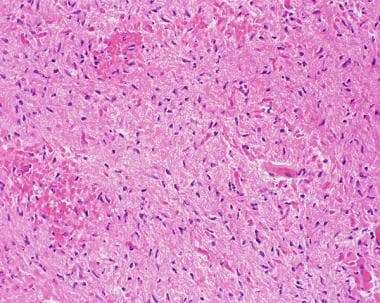