Myoepithelial cells are seen in many secretory organs including salivary glands, where they are usually encountered in the acini and intercalated ducts (see the image below). These cells express a dual epithelial and smooth muscle phenotype and are likely of ectodermal origin.
Their neoplastic biologic behavior in many salivary gland tumors, unpredictable at times, has and is still being characterized either as a major component of myoepithelial entities or as one of the components of many salivary gland tumors (eg, pleomorphic adenoma, adenoid cystic carcinomas). 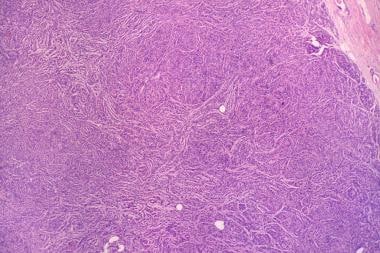 A photomicrograph of a myoepithelioma. The upper, right corner shows a well-defined margin of the lesion.

In 1943, Sheldon was the first to identify myoepithelial tumors as a distinct salivary gland tumor entity.
Following Sheldon’s reference, earlier series included those of Bauer and Fox and Bhaskar and Weinmann.
The major myoepithelial neoplastic entities in which myoepithelial cells are the exclusive tumor component or a major neoplastic component include the following:

Myoepithelioma was recognized as a histologically distinct entity by the World Health Organization (WHO) in 1991.
It is a benign salivary gland tumor that consists entirely of myoepithelial cells with variable cellular morphologies including spindle, epithelioid, plasmacytoid, or clear cells. A myoepithelioma can be composed of one or a mixture of those cell types, and a variable stromal component can be seen in these tumors. Among investigators, the level of “tolerance” for the presence of epithelial ductal elements in a myoepithelioma is variable and controversial (see Microscopic Findings). To date, more than 200 cases have been reported.