Although still in use clinically, it is important to note that systemic inflammatory response syndrome(SIRS) as a definition has been abandoned since 2016. This has occurred mainly as mortality prediction using SIRS alone is poor compared with Sequential Organ Failure Assessment (SOFA). Furthermore, sepsis has been redefined as requiring organ dysfunction.

In 2016, the Society of Critical Care Medicine (SCCM) and the European Society of Intensive Care Medicine (ESICM) led a task force to propose a new definition for sepsis. Sepsis-3 was born, defined as “life-threatening organ dysfunction caused by a dysregulated host response to infection.”
This created a paradigm shift in the sepsis landscape. Although created in 1998,
and largely not designed to predict mortality like Acute Physiology and Chronic Health Evaluation (APACHE) II or Simplified Acute Physiology Score (SAPS), the nondiagnostic intensive care unit (ICU) mortality prediction score SOFA was recommended by the task force owing to SOFA’s superior predictive validity for in-hospital mortality as compared with SIRS. In other words, SOFA was endorsed by the 2016 SCCM/ESICM Task Force to identify in-hospital patients at risk of death due to sepsis. The following system assessments comprise the SOFA severity score:

SOFA as a clinical tool can be accessed here: SOFA Calculator.

In 2001, the SCCM/ESICM, along with other leading organizations, including the American College of Chest Physicians (CHEST), the American Thoracic Society (ATS), and the Surgical Infection Society (SIS), convened as the Consensus Conference reviewing the 1992 SIRS criteria to establish the general definitions known as Sepsis-2, leaving the definitions of sepsis and septic shock unchanged for the next twenty years.

In 1992, CHEST and the Society of Critical Care Medicine (SCCM) introduced definitions for SIRS, sepsis, severe sepsis, septic shock, and multiple organ dysfunction syndrome (MODS).
The idea behind defining SIRS was to define a clinical response to a nonspecific insult of either infectious or noninfectious origin. SIRS is defined as two or more of the following variables (see Presentation and Workup):

Heart rate of more than 90 beats per minute

SIRS is nonspecific and can be caused by ischemia, inflammation, trauma, infection, or several insults combined. Thus, SIRS is not always related to infection. Although sepsis has diverged from SIRS criteria for diagnosis and management in recent years, focusing more on infectious etiologies, the pathophysiologic processes present in sepsis and noninfectious SIRS are remarkably similar, making a discussion of SIRS in critical illness appropriate.(See Pathophysiology and Etiology.)

See the diagram below. 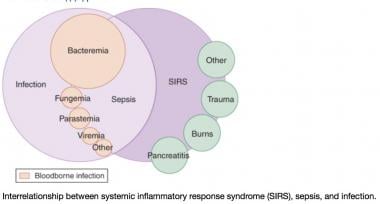 A Venn diagram of the systemic inflammatory response syndrome (SIRS). The diagram shows the overlap between infection, bacteremia, sepsis, SIRS, and multiorgan dysfunction. This perspective shows that not only infection can cause SIRS. Courtesy of emDocs.net (http://www.emdocs.net/mimics-of-sepsis/).

Infection is defined as “a microbial phenomenon characterized by an inflammatory response to the microorganisms or the invasion of normally sterile tissue by those organisms.”

Bacteremia is the presence of bacteria within the bloodstream, but this condition does not always lead to SIRS or sepsis. Sepsis is the systemic response to infection and is defined as the presence of SIRS in addition to a documented or presumed infection. Severe sepsis meets the aforementioned criteria and is associated with organ dysfunction, hypoperfusion, or hypotension. (See Etiology, Treatment, and Medication.)

Sepsis-induced hypotension is defined as “the presence of a systolic blood pressure of less than 90 mm Hg or a reduction of more than 40 mm Hg from baseline in the absence of other causes of hypotension.” Patients meet the criteria for septic shock if they have persistent hypotension and perfusion abnormalities despite adequate fluid resuscitation. MODS is a state of physiologic derangements in which organ function is not capable of maintaining homeostasis. (See Pathophysiology.)

Although not universally accepted terminology, severe SIRS and SIRS shock are terms that some authors have proposed. These terms suggest organ dysfunction or refractory hypotension related to an ischemic or inflammatory process rather than to an infectious etiology.

Do We Really Need to Subject Our Patients With Sarcoidosis to TMP-SMX to Prevent PJP?

Transpulmonary Pressure Measurement: The Key to Protecting the Lung, or an Abstract Waste of Time?

Withholding Anticoagulation for Isolated Subsegmental Pulmonary Embolism — Houston, We Have a Problem