The autopsy begins before the decedent reaches the morgue; that is, analysis of the body at the scene is integral to death investigation, even before the first cut. Scene investigation is commonly (and mistakenly) assumed not to be an official component of the autopsy. Alan Moritz, MD, in his oft-cited journal article “Classical Mistakes in Forensic Pathology,” addresses this assumption, and the possible adverse sequelae of pathologist absence at unclear or complicated death scenes.
Correlation between bodily injury and all available evidence is crucial and best evaluated in the context of the death scene. The significance of certain findings “…may [only] be apparent to a medically trained person.”

The importance of the pathologist at the scene has far-reaching implications beyond the investigation itself. In the comprehensive Forensic Pathology: Principles and Practice text, the authors reiterate that the presence of the pathologist helps establish a “…collegial working environment to facilitate optimal exchange of pertinent information” across several agencies.

A few comments are in order before proceeding further. Investigation into the circumstances of a person’s demise does not always revolve around the subtext of salacious activity; not all suspicious or unusual deaths are the result of a crime. Herein, “crime scene investigation” shall be referred to as the more generic “death scene investigation.”

For simplicity, the term “pathologist” or “investigator” will be used interchangeably when referring to the death scene investigator from either the coroner’s or medical examiner’s office. Also, “coroner” and “medical examiner” will be used interchangeably, although it is understood that there are often significant differences between coroner and medical examiner systems. It should be noted, however, that the make-up of a particular jurisdiction — its case volume, general population, geography, location, or availability of resources — may necessitate delegation of the investigator role to other appropriately trained professionals (ie, deputy scene investigators, nonpathologist medical doctors, police officers, etc).

Jurisdiction of death investigation is the responsibility of the local coroner or medical examiner. There is no uniform system across the United States; different states, counties, and cities use one or the other, or a hybrid of both. The differences between the 2 entities are not the focus of this article and will not be explicitly discussed.

Professional associations like the National Association of Medical Examiners (NAME) and the American Board of Medicolegal Death Investigators (ABMDI) are the most widely accepted resources for guidance regarding the general practice and certification of death scene investigators. However, there is also no officially mandated, transjurisdictional protocol for the investigation of a death scene. The National Medicolegal Review Panel (NMRP)* — a group consisting of medical, legal, and forensic professionals — sought to address this deficit and published Death Investigation: A Guide for the Scene Investigator (1999),whichsetforthacomprehensive protocol of suggested guidelines for investigators.

The motto of the NMRP is aptly, “Every Scene. Every Time.”; that is, the scene should be approached systematically in each case so as not to omit crucial steps, but the overall intent of the guidelines is to provide a framework that can accommodate special or unexpected circumstances. There needs to be flexibility and even creative thinking when the investigation wanders outside the realm of the “norm.”

* The NMRP was formed under the umbrella of the US Department of Justice (USDOJ), and in conjunction with The Centers for Disease Control and Prevention (CDC), the National Institute of Justice (NIJ), and the Bureau of Justice Assistance (BJA).

Altered scene: An altered scene is a death scene in which the body has been moved, the microenvironment has been changed, or materials have been displaced or deposited before the arrival of the investigator.

Blood spatter: Blood spatter is generated when force is exerted such that it overcomes the surface tension of the parent blood source. Such forces can be due to several mechanisms such as impact (eg, gunshots, blunt force, or stabbing) or projection (eg, cast-off, arterial spray, or expiration). These forces generate shapes or patterns of blood on surfaces of variable size and shape and which are influenced by trajectory, force, surface properties, and environmental/situational factors (see the following images).
(Also note: The correct term is “spatter,” not “splatter”). See Blunt Force Trauma. 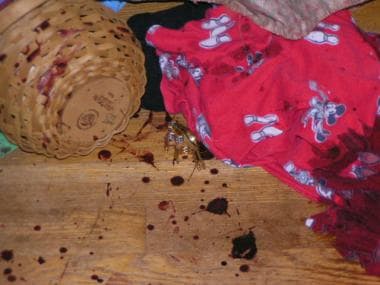 This photograph depicts single drops of blood from an overhead source positioned nearly perpendicular to the surface. Note how the drops have struck the rough surface, creating relatively round stain patterns with satellite spatters. 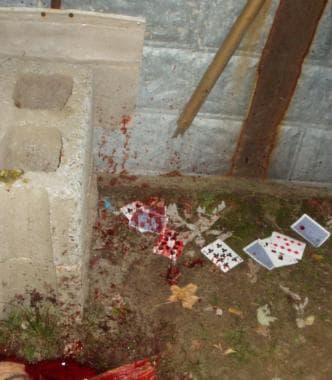 This photograph shows what is conventionally termed a “medium velocity” impact spatter pattern that is consistent with the forces generated during a beating or stabbing. Note the victim in the lower left corner and the intermediate size (1-3 mm) of the spatter. Smaller and larger bloodstains may be present. 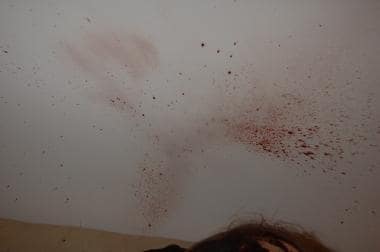 This photograph shows what is conventionally termed a “high velocity” impact spatter pattern that is consistent with that seen as a result of a gunshot. Note the sub-millimeter “atomized” blood surrounding an area of sparing where the head of the victim blocked the distribution of the blood stains. In addition, there is directionality of the stain pattern with the area of sparing as the origin. Smaller and larger bloodstains may be present. 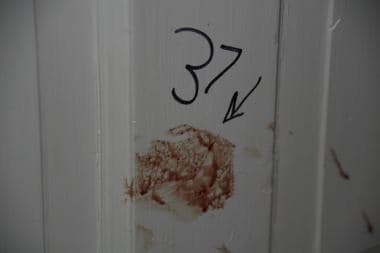 This photograph shows what is conventionally termed a “transfer” or “contact transfer” bloodstain pattern that is consistent with an object, wet with blood, which came in contact with this surface. In some cases, the pattern may reveal the source of the contacting object, or it may contain patent finger or palm prints from the hand of the victim or assailant.

Cast-off: Cast-off is the bloodstain pattern created when a blood source is adherent to a moving object which is producing injuries (see the images below). When the objects is then moved and centrifugal forces become greater than the surface tension of the parent blood source, blood droplets with flight characteristics can strike nearby surfaces, often above, beside, or behind the assailant, in linear or curvilinear patterns. Examination of these bloodstain patterns may assist in the determination of the relative position of the assailant, with regard to the victim, at the time of injury. 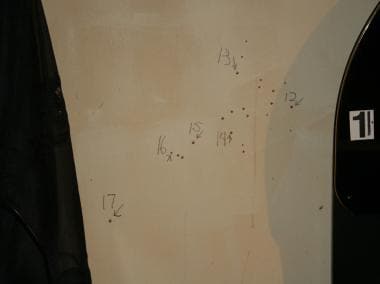 This photograph shows what is conventionally termed a “cast-off” bloodstain pattern that is consistent with beating or stabbing injuries. Note the curvilinear distribution of blood droplets, which must be correlated with the evidence at the scene as well as body position in order to determine the relative position of the assailant within the scene. 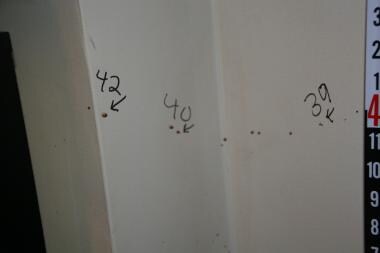 This photograph shows another “cast-off” bloodstain pattern that is consistent with beating or stabbing injuries. Note the nearly linear distribution of blood droplets, which must be correlated with the evidence at the scene as well as body position in order to determine the relative position of the assailant within the scene.

Coroner: In some locales, a coroner is the individual charged with performing the death investigation and with taking jurisdiction over a body whose death is the result of a homicide, suicide, accident, or suspicious or ambiguous circumstances. A coroner is most often an elected official and is usually not required to be a forensic pathologist. In many jurisdictions, a coroner is not required to be a physician. A coroner may contract with a pathologist for the performance of autopsies.

Death scene: The death scene is the location where a person died or where the chain of events began that culminated in death.

Manner of death: The manner of death is the classification of an individual’s death based on the interpretation of the autopsy findings, scene investigation, and all available circumstantial data into one of the following categories: natural, accident, homicide, suicide, or undetermined. (“Pending” may also be used if additional studies are in progress; some jurisdictions also have “therapeutic misadventure” as an option).

Medical examiner: A medical examiner is an individual charged with performing the death investigation and taking jurisdiction over a body whose death is the result of a homicide, suicide, accident, or suspicious or ambiguous circumstances. A medical examiner is usually an appointed official, required to be a physician, and is a forensic pathologist.

Primary scene: A primary scene is the location where the lethal injury or toxicity actually occurred.

Secondary scene: A secondary scene is the location to which the body had been moved before the body was found. This may also be referred to as a “dump site.”

The coroner or medical examiner generally has jurisdiction over a body in which the decedent’s manner of death is considered to be any of the following:

Suspicious or unexpected: These may include, but are not limited to, deaths within a 24-hour period of hospital admission, infant deaths, deaths in which the person has not been under the recent care of a physician, and deaths in a “previously healthy person.”

Homicide: This is traditionally defined as any death occurring at the hand of another, either by act or omission.

Suicide: This category includes any death that involves the intentional taking of one’s own life.

Accident: Accidental deaths are those occurring as a result of unintended circumstances and/or outcomes.

In addition, the medical examiner may also be called up to investigate natural deaths, which occur as the result of the natural progression of disease. This may not be intuitive to lay persons, but in many instances, an initially suspicious scene or findings may, in fact, be the result of a natural death (eg, massive hemoptysis, “purging” due to decomposition following a heart attack. See the section on ” Common Misconceptions.”) Due to epidemiologic and public health concerns, deaths from potentially infectious agents or a suspected public health problem may also fall under the jurisdiction of the coroner or medical examiner.

In forensic practice, the manner of death is determined by considering the primary insult that eventually leads to death. For example, John Doe was the victim of a robbery in 1979. He suffered a gunshot wound to the spinal cord, rendering him a paraplegic, but he ultimately survived. For the next 30 years, Mr. Doe was confined to a wheelchair. In the later years of his life, he developed decubitus ulcers, abscesses, and overwhelming sepsis as a result of his immobility, and died. The manner of death would be certified as a “homicide,” as the initial insult (the gunshot wound to the spinal cord) set off a chain of events (paraplegia, immobility, ulcers, sepsis) that led to a compromise in his health status, and ultimately his death. Thus, seemingly “natural” deaths may, in fact, fall under medical examiner/coroner jurisdiction if a thorough investigation is carried out.

If a case falls under the jurisdiction of the coroner/medical examiner, at a minimum the investigator should be provided with a description of the scene and the circumstances surrounding death from a responding official. Optimally, scene investigation should be carried out by the pathologist or trained investigator in homicides, unexpected infant fatalities, and in other suspicious deaths.