Determination of cause of death in natural deaths, particularly when the death occurred suddenly, unexpectedly, or in the young, is an important part of forensic autopsy practice, for reasons including the following:

Identification of disease processes and patterns provides epidemiologic data that can be used to control disease outbreaks, identify emerging infectious disease or changes in disease patterns, or to identify reportable diseases, such as meningococcal meningitis, so that close contacts can receive prophylactic treatment

Finally, performance of an autopsy when there is no readily obvious cause of death can provide the deceased’s family and friends with answers, thereby helping with the grieving process

Accidental or intentional injuries comprise the leading cause of death in individuals from ages 1 to 44 years; still, at least half of the deaths coming to the attention of the medical examiner will be due to natural causes.
Most natural deaths are due to cardiac-related disorders, malignancy or infection. In rare cases, a definitive cause of death may not be identified following a complete and thorough autopsy. Although this quite unsatisfying for the pathologist and the family, a “negative” autopsy can still prove to be of vital importance. The lack of a definitive cause may prompt further investigations; rare hereditary diseases, hazardous environmental conditions, unusual toxic exposures, or unsafe consumer products may only be suspected or identified after a complete, detailed and through autopsy rules out more likely causes.

Even when a death is unequivocally due to a natural disease process, careful attention should be paid to an individual’s risk factors for that particular disease. A number of common natural diseases can occur spontaneously or can be secondary to a non-natural, injurious event. The inciting event may be recent, but it does not have to be to be; care should be taken when reviewing the decedent’s history. Identification of a non-natural proximate cause can significantly change the manner of death, as illustrated in the example provided below:

The following image is from the autopsy of a young boy who suddenly collapsed and died during a walk with his family. 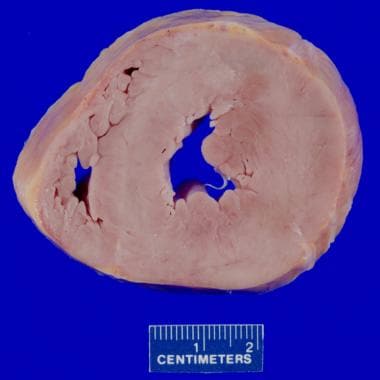 Cardiomegaly (220 g) and symmetric left ventricular hypertrophy from the autopsy of a 6-year-old boy who suddenly collapsed while on a walk with his family. These findings are consistent with symmetric hypertrophic cardiomyopathy. Other autopsy findings included pulmonary edema and ascites, as well as hypertensive changes in the lungs and early cardiac cirrhosis.