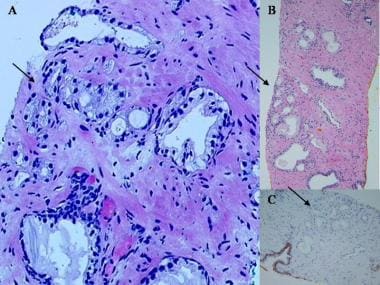 A prostatic core biopsy showing a focus of atypical small acinar proliferation (ASAP) suspicious for, but not diagnostic of, cancer (arrow, A). A repeat biopsy in the proximity of the same site shows another focus of crowded small-caliber glands (arrow, B), which, on immunohistochemistry with the basal cell marker 34βE12, reveals absence of basal cells, thereby confirming a diagnosis of adenocarcinoma Gleason 3+3 (arrow, C).

Such foci are found in approximately 2-5% of prostate needle biopsy specimens. ASAPs are located most often in the peripheral zone of the prostate; they are rarely located in the transition zone.

ASAP suspicious for malignancy discovered after prostatic core biopsy is highly predictive of subsequent prostatic adenocarcinoma on repeat biopsy, with a reported range of 17-60% of cases.
Schlesinger et al found prostatic adenocarcinoma in subsequent biopsies in 23% of cases after prior diagnosis of high-grade prostatic intraepithelial neoplasia (HGPIN) alone; in 37% after diagnosis of ASAP alone; and in 33% after prior diagnosis of HGPIN with contiguous or noncontiguous ASAP.
Although the predictive value of HGPIN for cancer fell from 36% in older series to 21% in newer series, the predictive value of atypical small acinar proliferation was nearly constant.

The etiology of ASAP suspicious for malignancy reflects that of prostatic acinar adenocarcinoma. The implication is that some of these foci really represent underlying adenocarcinomas that are not diagnosable with confidence on core biopsies because of qualitative or quantitative criteria falling below a threshold for malignancy.

No specific genetic information exists for ASAP per se, although those cases of ASAP that represent underdiagnosable cancer would indicate a similar molecular genetic profile as acinar adenocarcinoma.

All ASAPs are either marginally sampled cancer or benign acini with reactive atypia or atrophy. Thus, the epidemiology of ASAP overlaps that of prostatic acinar adenocarcinoma.