A pacemaker-mediated tachycardia (PMT) can be defined as any condition in which a pacemaker paces the ventricles at rates that are inappropriately fast.
This can be due to (1) a rate response setting that is too sensitive, (2) tracking of atrial noise (such as what may occur with electromagnetic interference), (3) inappropriate pacemaker manipulation with rate response turned on, or (4) tracking of an atrial tachyarrhythmia related to upper rate settings.

Traditionally, however, the term pacemaker-mediated tachycardia, also called endless-loop tachycardia, is used to refer to a form of a reentrant tachycardia and can occur in patients who have dual-chamber pacemakers. The pacemaker forms the anterograde (atrium to ventricle [A → V]) limb of the circuit and the atrioventricular (AV) node is the retrograde limb (ventricle to atrium [V → A]) of the circuit.
This classic form is referred to and discussed as PMT for the rest of this article.

See the electrocardiograms (ECG) below. 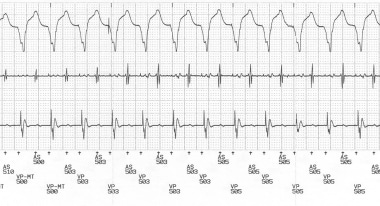 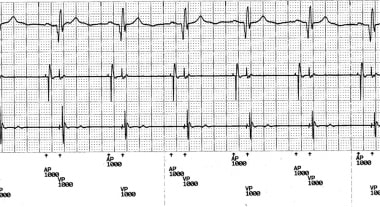 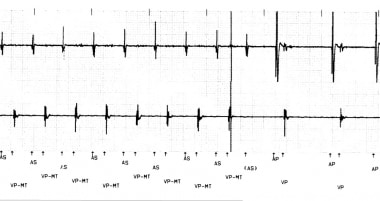 This is a typical example of PMT with ventricular pacing at maximum tracking rate (VP-MT) and then termination of the tachycardia as the atrial sensing (AS) is in the PVARP. This is due to PVARP extension, which is a feature of this particular pacemaker. The solid line indicates where PMT is detected and this is the point at which PVARP extension occurs. As this electrogram was detected, but not sensed to be acted upon, the ventricular tracking stopped and the tachycardia terminated. In some cases, pacemakers have a program to lengthen the PVARP after PMT detection to potentially stop the tachycardia. Alternatively, prevention of one ventricular paced beat can also stop the tachycardia. Some pacemakers use this algorithm.