In 1930, Wolff, Parkinson, and White described a series of young patients who experienced paroxysms of tachycardia and had characteristic abnormalities on electrocardiography (ECG).
Currently, Wolff-Parkinson-White (WPW) syndrome is defined as a congenital condition involving abnormal conductive cardiac tissue between the atria and the ventricles that provides a pathway for a reentrant tachycardia circuit, in association with supraventricular tachycardia (SVT). See the image below for a typical “preexcited” ECG. 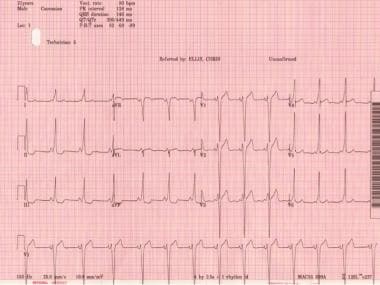 The clinical manifestations of WPW syndrome reflect the associated tachyarrhythmia episodes—rather than the anomalous ventricular excitation per se. They may have their onset at any time from childhood to middle age, and they can vary in severity from mild chest discomfort or palpitations with or without syncope to severe cardiopulmonary compromise and cardiac arrest. Thus, presentation varies by patient age.

Infants may present with the following:

A history of not behaving as usual for 1-2 days

An intercurrent febrile illness may be present

A verbal child with WPW syndrome usually reports the following:

Sudden onset of a pounding heartbeat

Pulse that is regular and “too rapid to count”

Typically, a concomitant reduction in their tolerance for activity

Physical findings include the following:

Normal cardiac examination findings in the vast majority of cases

During tachycardic episodes, the patient may be cool, diaphoretic, and hypotensive

Clinical features of associated cardiac defects may be present, such as the following:

Routine blood studies may be needed to help rule out noncardiac conditions triggering tachycardia. These may include the following:

The diagnosis of WPW syndrome is typically made with a 12-lead electrocardiogram (ECG) and sometimes with ambulatory monitoring (eg, telemetry, Holter monitoring). SVT is best diagnosed by documenting a 12-lead ECG during tachycardia, although it is often diagnosed with a monitoring strip or even recorder. The index of suspicion is based on the history, and rarely, physical examination (Ebstein anomaly or hypertrophic cardiomyopathy [HOCM]). Although the ECG morphology varies widely, the classic ECG features are as follows:

Echocardiography is needed for the following:

Stress testing is ancillary and may be used for the following:

To reproduce a transient paroxysmal SVT, which is triggered by exercise

To document the relationship of exercise to the onset of tachycardia

Electrophysiologic studies (EPS) can be used in patients with WPW syndrome to determine the following:

The mechanism of the clinical tachycardia

The electrophysiologic properties (eg, conduction capability, refractory periods) of the accessory pathway and the normal atrioventricular (AV) nodal and His Purkinje conduction system

The number and locations of accessory pathways (necessary for catheter ablation)

The response to pharmacologic or ablation therapy

Radiofrequency ablation of the accessory pathway

Adults: IV adenosine 6-12 mg via a large-bore line (the drug has a very short half-life)

Pediatric patients: Adenosine and verapamil or diltiazem are dosed on the basis of weight.

IV procainamide or amiodarone if wide-complex tachycardia is present, ventricular tachycardia (VT) cannot be excluded, and the patient is stable hemodynamically

A level of 100 J (monophasic or lower biphasic) initially

Radiofrequency ablation is indicated in the following patients:

Patients with AVRT or AF with rapid ventricular rates found incidentally during EPS for unrelated dysrhythmia, if the shortest preexcited RR interval during AF is less than 250 ms


Asymptomatic patients with ventricular preexcitation whose livelihood, profession, insurability, or mental well-being may be influenced by unpredictable tachyarrhythmias or in whom such tachyarrhythmias would endanger the public safety


Patients with WPW and a family history of sudden cardiac death

Patients in whom RF catheter ablation (with repeated attempts) fails

Oral medication is the mainstay of therapy in patients not undergoing radiofrequency ablation, although the response to long-term antiarrhythmic therapy for the prevention of further episodes of tachycardia in patients with WPW syndrome remains quite variable and unpredictable. Choices include the following:

In pregnancy, sotalol (class B) or flecainide (class C)