Raynaud phenomenon (RP) was first described by Maurice Raynaud in 1862 and refers to a transient vasospasm of peripheral arteries and arterioles that classically results in triphasic color changes in the affected region.
The initial artery and arteriole vasospasm causes pallor (white), followed by cyanosis (blue) due to dilation of the capillaries and venous stasis (deoxygenated blood), with continued artery and arteriole vasospasm. The arteries and arterioles then dilate, causing rapid return of blood flow (red, reactive hyperemia).
The fingers are the most commonly affected region, and Raynaud phenomenon is typically triggered by cold exposure or stress. 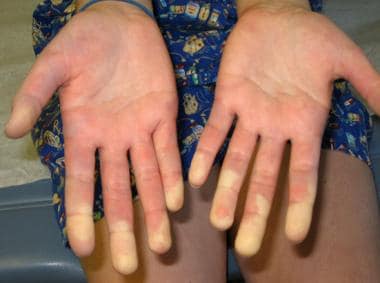