First described in 1982 by Hassoun et al, central neurocytoma (CN) is a rare tumor of neuroglial origin.
CN is generally regarded as a benign neoplasm with a favorable prognosis and affects mainly young adults. The mean age of presentation is 29 years, with an age range from 8 days to 67 years.

CN is typically located in the lateral ventricles, near the foramen of Monro, with a characteristic attachment to the septum pellucidum. Central neurocytomas are rare, constituting only 0.25-0.50% of all intracranial tumors.
However, they are the most common primary intraventricular tumors in adults. CN typically affects young adults around the third decade.

Extraventricular neurocytomas have already been recently described. They can be situated in the cerebral hemispheres, pons, cerebellum, spinal cord, and retina. They behave in a similar fashion to their intraventricular counterparts.

See the central neurocytoma images below. 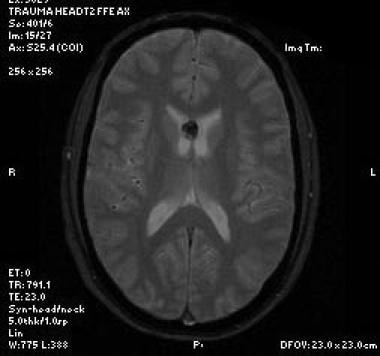 Axial GRE image at the level of the lateral ventricles demonstrates a small midline hypointense mass attached to the septum pellucidum. The hypointensity reflects calcification and/or hemosiderin deposition. 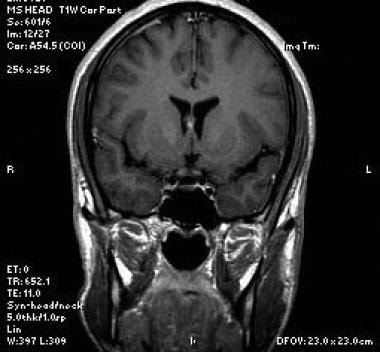 Coronal T1-weighted sequence at the level of the frontal horns of the lateral ventricles nicely depicts the mass intimately related to the septum pellucidum. 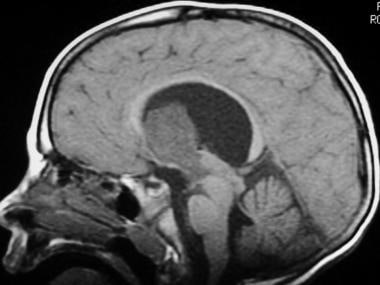 The diagnosis and management of CN remains controversial because most clinical series are small. The most important therapeutic modality is surgery, and a safe maximal resection confers the best long-term outcome.

Given the intraventricular location of the vast majority of CNs, it is not surprising that the most common presenting signs and symptoms are related to hyrocephalus from obstruction of CSF flow in the ventricular system. Patients may present with acute symptoms related to sudden development of ventricular obstruction and elevated intracranial pressures, or there may be a more insidious onset of symptoms.

Schild et al analyzed 27 patients with central neurocytomas regarding their presenting symptoms, and 93% of patients complained of headaches, 37% had visual changes, and 30% experienced nausea and vomiting at presentation.
Most of these symptoms were attributed to increased intracranial pressure secondary to obstructive hydrocephalus. Cases with more acute presentation due to hemorrhage into the tumor are also well described. In another study by Wang et al, out of 27 patients, 21 presented with headache and 6 with vomiting.

On visual inspection, central neurocytomas appear as soft, tan-colored, well-demarcated masses. The consistency can vary from soft to gritty, depending on the degree of calcification. The tumor usually does not have a large zone of attachment of surrounding brain tissue. However, there may be attachment to the surrounding ventricular surfaces, rendering gross total resection difficult or impossible.

Histologically, a central neurocytoma is characterized by a small, uniform neoplastic cell population with features of neuronal differentiation.
Perivascular arrangement of neurophils may mimic the perivascular pseudorosettes of ependymoma. Artificial perinuclear halo formation creates a remarkable likeness to oligodendroglioma. CN is immunoreactive to the neuronal marker proteins neuron-specific enolase (NSE) and synaptophysin.

Studies have shown that neurocytoma cells exhibit both neural and glial phenotypes and have the properties reminiscent of precursor cells derived from the periventricular matrix. For this reason, this tumor can be considered as a glial neuronal tumor with predominantly neurocytic differentiation. It remains controversial as to whether CN arises from cells committed to neuronal phenotype or from bipotential cells in the periventricular matrix.

Central neurocytoma is histologically benign and has an excellent prognosis.
The 5-year survival rate is 81% (Schild 1997).
Lateral ventricular tumors can be resected via a transcortical or transcallosal approach. In a study of 27 patients with central neurocytoma, there were no recurrences in the 17 patients who underwent gross total resection with no adjuvant therapy.
In contrast, the less common atypical neurocytoma is associated with increased proliferative activity and a high rate of recurrence. Craniospinal dissemination has been previously described.

Currently, the monoclonal antibody MIB-1 labeling index (LI) appears to be the best predictor of proliferative potential and clinical outcome of CN. The use of MIB-1 LI seems to make it possible to distinguish between CN and atypical neurocytoma, characterized by a higher incidence of recurrence and an MIB-1 index greater than 2%. Soylemezoglu et al
concluded that a MIB-1 LI of 2% might be critical in determining recurrence. After a follow-up of 150 months, they observed that patients with an MIB-1 LI less than 2% had a relapse rate of 22%, compared with 63% when the level was greater than 2%.

Stereotactic radiosurgery can be an effective and safe alternative therapy for recurrent or residual central neurocytoma.