Lipodystrophy, the abnormal distribution of fat, encompasses lipoatrophy, the loss of fat, and other abnormalities of adipose tissue. Generalized lipoatrophy, also known as Lawrence-Seip syndrome, is a rare group of syndromes, either acquired or congenital, characterized by a near-complete absence of fat. See the image below. 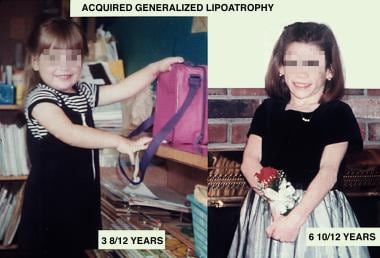 Lipoatrophy syndromes: Heterogeneous cluster of conditions in which the common trait is a lack of fat tissue, either generalized or partial and congenital or acquired
; the metabolic consequences include peripheral insulin resistance and hypertriglyceridemia

Lipodystrophy: Abnormal distribution of fat; consists of lipoatrophy and other abnormalities of adipose tissue

Familial partial lipodystrophy (or, Kobberling-Dunnigan syndrome, familial partial lipodystrophy [FPLD] or Dunnigan syndrome): Autosomal dominant; affects primarily white persons of northern European descent but also some people of pedigrees of Asian descent; difficult to discern affected from unaffected patients before the onset of puberty; normal fat distribution at birth but a loss of subcutaneous fat in the extremities and/or trunk with early puberty, followed by increased fat in the face and neck with completion of puberty
; visceral fat and interfascicular intramuscular fat depots are preserved

Other causes of acquired lipodystrophy: Aggressive treatment of patients infected with human immunodeficiency virus, particularly with protease inhibitors (partial lipoatrophy: loss of subcutaneous fat from the face, extremities, and trunk)
; increased visceral fat, with buffalo hump,
accompanied by insulin resistance and hypertriglyceridemia; affects children and adults of both sexes

Mechanisms for adipocyte deficiency include the following:

Potential mechanisms that may explain insulin resistance and other metabolic abnormalities caused by fat loss in lipoatrophy syndromes include the following
:

Absent or immature adipocytes: Inability to synthesize and release adipocytokines (eg, leptin, adiponectin) that may be important to maintain normal metabolism

Excessive accumulation of triglycerides in multiple sites, especially the liver and muscles

The clinical problems requiring treatment in lipoatrophy syndromes are diabetes and hypertriglyceridemia.

Although several classes of antidiabetic drugs are marketed in the United States, achieving good glycemic control (glycated hemoglobin < 7.2%) is difficult for most patients with lipoatrophic diabetes.

The dyslipidemia of severe lipoatrophy is difficult to treat with currently available therapeutic interventions. In addition, lifestyle modifications alone may not be sufficient and may need to be implemented along with pharmacotherapy.

Troglitazone is remarkable in its ability to improve hypertriglyceridemia in addition to improving glycemia. Some clinicians also prefer to use fibrates and statins rather than niacin because of severe insulin resistance.

In women with lipoatrophy syndromes, oral estrogens should be avoided as they can exacerbate the hypertriglyceridemia and result in acute pancreatitis.